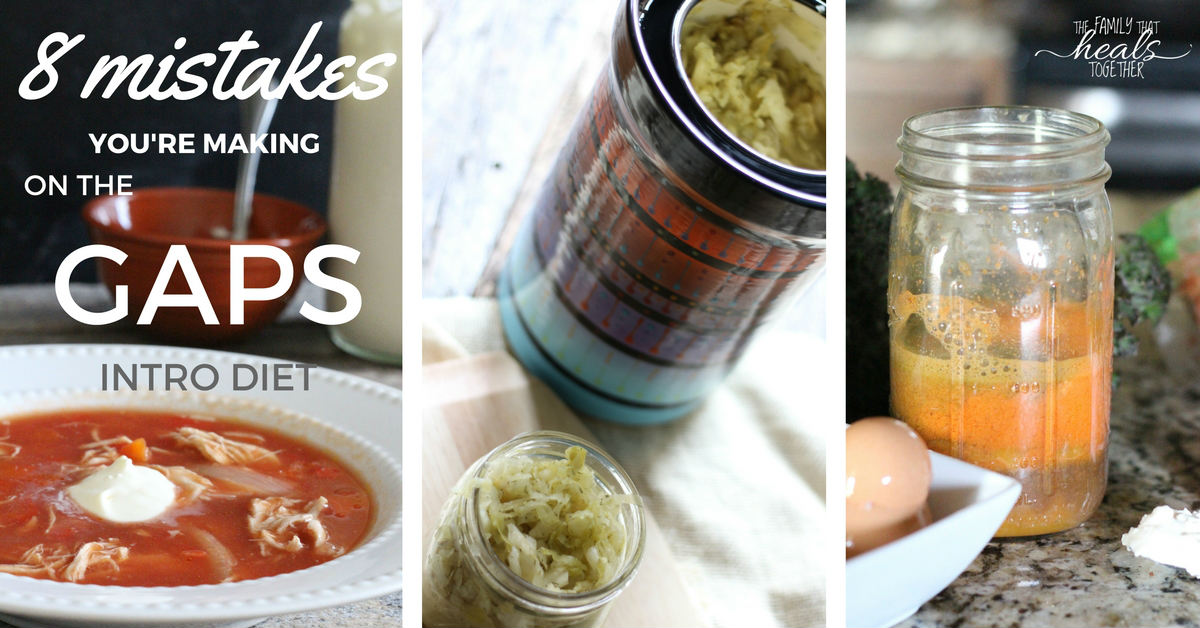 You’ve decided to take the plunge and do the ultimate gut-healing diet: the GAPS intro diet. You’ve done your research and all the prep and you’re ready to go. But there are a few errors folks make on the GAPS intro diet. Read below so you don’t fall prey to these common mistakes.

First: what is the GAPS intro diet?

If you’re not familiar with the GAPS intro diet, I’ll give you a quick rundown.

GAPS intro is a temporary, intensive healing diet that can heal everything from food allergies, to autoimmune conditions, to autism, ADHD, and related behavioral disorders. “GAPS” stands for gut and psychology syndrome and was created by Dr. Natasha Campbell-McBride as a means of healing psychological and developmental disorders.

GAPS intro eliminates grains, starches, and sugars, and involves six stages, beginning with soups made with slow-cooked meats and veggies, as well as fermented veggies and dairy, then working up to eventually adding in fresh vegetables and fruits.

Our family is currently doing the GAPS intro diet for the third time (I think it’s great to do it once a year!), and we have healed our son’s behavioral disorders, plus a number of food sensitivities for us all. It’s truly been life-changing for our family, but we’ve made a lot of mistakes along the way. Learn from my mistakes so you don’t make them!

Get the book here.

Avoid these mistakes to improve healing and make better progress on GAPS intro!

Yep, you heard that right. You’re not supposed to eat bone broth on the GAPS intro diet, at least not until later stages and much healing has been done.

Wait- what? Isn’t broth the main food to eat on GAPS intro? Nope, it turns out, you should be eating meat stock, not bone broth. Long-cooked bone broth releases free glutamates and is tougher on the gut, while shorter cooked meat stock is gentler and more healing to the gut.

To make meat stock, use meaty, bone-in cuts of meat like whole chickens (read how to make a poached chicken for meat stock here), chicken thighs, drumsticks, and wings, whole wild-caught fish, and steaks or roasts. The key to meat stock is that you are cooking meat along with the bones, which will include the cartilage and yield a nicely-gelling stock.

Place your meat in a large stock pot and fill with water. You can add salt if you’d like. Bring to a boil on the stovetop, then turn down to a simmer for another two or three hours, until meat is tender. You can then use the cooked meat and stock in another pot to create a soup by adding veggies.

I typically remove the stock and some meat, leaving some meaty, cartilage-y bones behind, then add more water and make another round of stock to stretch it further. Once you’ve picked the bones clean, you can freeze them for use later on in the diet, or toss them.

While homemade fermented foods like sauerkraut are a staple in the GAPS intro diet, it’s imperative that you also use a high-quality, therapeutic probiotic. You simply cannot get enough strains of probiotics in a concentrated enough amount to make the same impact with food as you can with a good probiotic.

I’ve tried a number of probiotics. Seriously, a lot of different ones. There is one brand I trust above all others to really make an impact on our gut health, which is Smidge. In the past, our family has used a gentle probiotic from Smidge, called Sensitive Probiotic Powder. It’s an excellent choice, particularly for very sensitive individuals. It’s highly concentrated, so it’s very effective, but is completely allergen-free and uses gentler strains for gentle gut improvement.

During our first time doing intro, I used a popular probiotic suggested for the GAPS diet, but since it was in capsule form, it was hard to get our little ones to take it, plus we went through it very quickly. I kept having to order more, which ended up being very costly in the long run. Smidge’s probiotics are a little pricey up front, but they last our family all through intro, plus months beyond. They are actually the cheapest probiotics I’ve found per dose for our family, as well as the most effective, so they’re worth their weight in gold, if you ask me.

I always tell myself we’re going to drink our meat stock all day, every day on the GAPS intro diet, yet it never seems to go that way. The kids get sick of it and start complaining. We run out. It’s just hard to drink enough stock.

But you’ve got to if you want to get all you were meant to get out of GAPS. I aim for soup at least three times a day at meals, which means we’re all getting around a cup of stock in, as well as a cup of plain stock before and between meals for 3-4 more cups a day.

I’ve found that if I use plenty of real salt, it tastes better and the kids are more likely to drink it, and once we introduce ghee, that helps with flavor sometimes too.

My best trick for getting the kids to drink stock, though, is stainless steel straws. They just prefer sipping through the straws rather than chugging straight from the mug. I generally put it in stainless steel cups as well, which seems to help too.

Slow and steady is the name of the game; let’s not forget the story of the tortoise and the hare.

I know it’s so hard to be patient when you’re so restricted, but if you can dig in and find the strength to go nice and slow, you will experience so much more healing than if you move too quickly.

Particularly, stages one and two are incredibly healing for the gut. Spending a good week or more on these two stages can heal and seal the gut, allowing you to heal food allergies in short order.

I find that once we add juicing (which is highly detoxifying), fresh veggies, and nut-based foods, we start moving rather quickly and want more and more tasty foods, which is fine, and the ultimate goal… but staying satisfied with the super healing soups as long as you can manage will prove more beneficial in the long run. 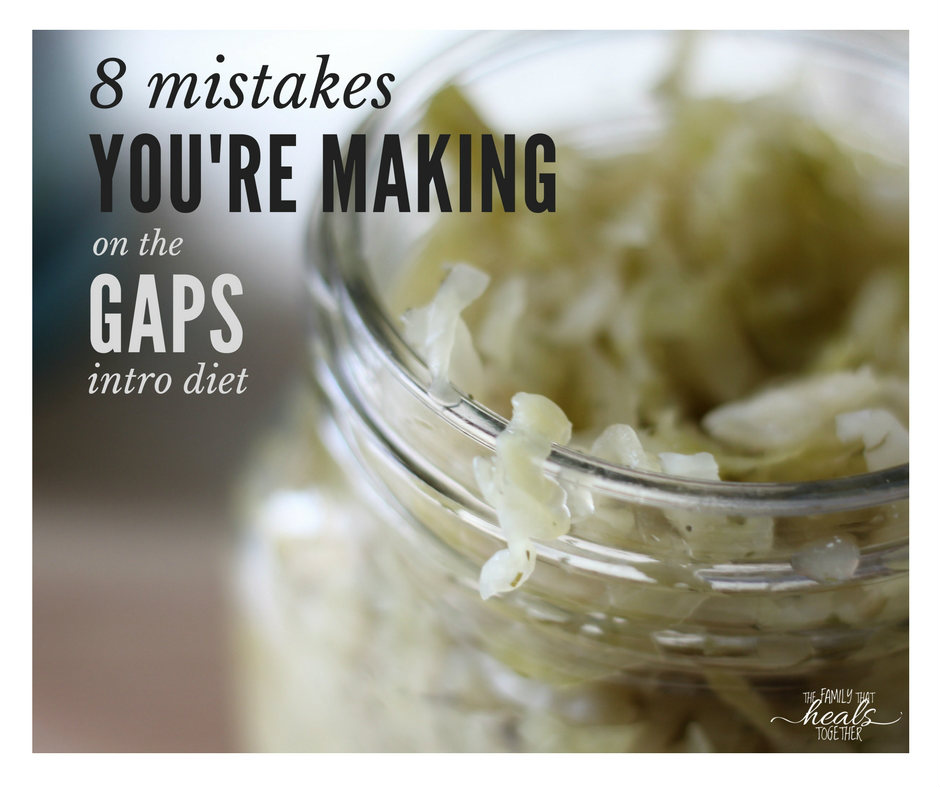 5. You’re eating too much honey.

That one time, when we did GAPS intro the first time and I gorged on honey and made myself super sick? That wasn’t fun. At all.

It’s so hard when you’re having terrible die off (bacteria, yeast, and parasites begin to die off as you starve them and heal your gut- it’s a painful, but very beneficial process). You crave all the foods that will feed harmful pathogens. They don’t want to die and they cause you to crave the foods they need to survive.

This can lead to eating way too much honey or other foods that are technically allowed on the GAPS intro diet, but should only be consumed in small amounts. While it’s very helpful to have a little raw honey in tea or gummies here and there to stabilize the blood sugar, that’s all it should be used for and should not be eaten by the spoonful. I’m saying that for a friend. I’ve never done that.

When die off happens, it does not feel good. There’s no way around it. It may result in headaches, tummy aches, skin rashes, and even puking.

It’s necessary to get the toxins out of your body to heal, though.

If you’re not supporting your detox pathways, you will feel worse, and those toxins will just re-circulate in your body, rather than leaving.

There are a few primary ways your body detoxes: through the skin, the sinuses, kidneys/bladder, and the bowels. You must do what you can to help these systems along. Here’s how:

You will not get the healing you deserve if you’re not pooping. Your body cannot appropriately deal with toxins if they’re not being moved out through your bowels. In order to keep your bowels moving:

GAPS is, by default, low carb. When you remove grains, starches, and sugars, you will be lowing your carb intake.

To avoid going too low carb, I make a soup every day with carrots and butternut squash, two of the highest carb veggies allowed on the GAPS intro diet. Peas, rutabegas, and turnips are also good options.

While ketosis (a function your body enters when it begins burning fat instead of carbs for energy) can be therapeutic, especially for those suffering from seizures and other neurological disorders, and can help with weight loss, it may cause more damage than good long-term, so be mindful of how you feel and adjust your carb intake accordingly.

Being too low carb is especially harmful for breastfeeding and pregnant mamas, because it restricts nutrients for baby, and encourages detoxification.

Have you made these mistakes on the GAPS intro diet? Have no fear! It’s not too late to adjust and receive ultimate healing. 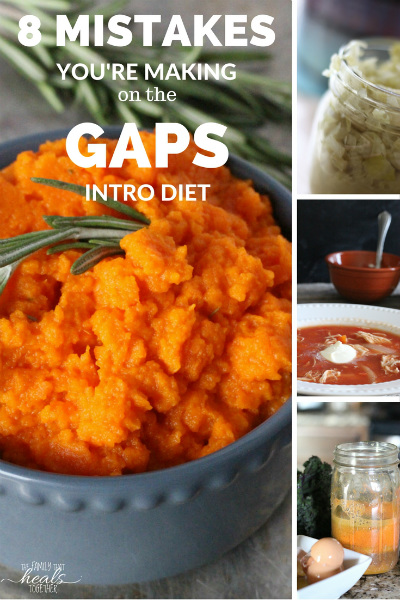 Be sure to share using one of our links so friends don’t make the same mistakes on the GAPS intro diet!