I’ve shared my vaccine story and how the MMR vaccine ruined my health with the hope that it might save you from the downward health spiral that vaccines can trigger.  Part of what makes vaccines so hard on the body is the toxic effects that they have on the immune system. There is also emerging evidence that vaccines may trigger an allergic reaction to food. Yep- vaccines can cause food allergies, folks. 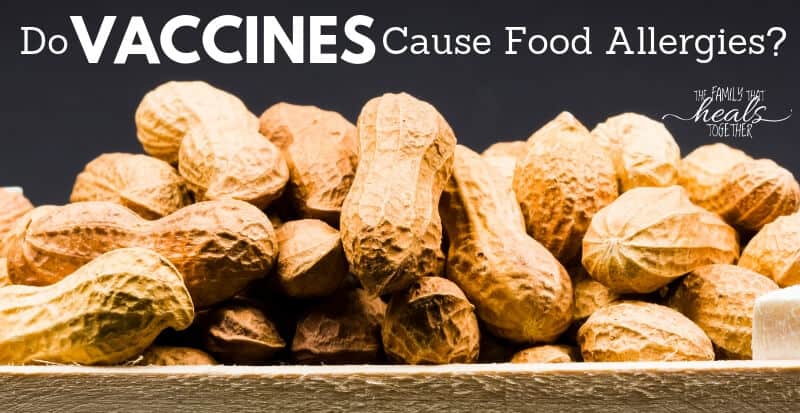 Autoimmunity is one side effect of vaccines. Allergies are another.

In short, when we inject food proteins, rather than consume them, we get in the way of the immune system’s ability to accept the food as normal.

We currently don’t know enough about vaccines to say that they can be safely given to everyone.

What does an allergic reaction to food look like?

When the body has an allergic reaction to food, the immune system produces signals specifically for that food. In the case of most food allergies, we call these signals IgE antibodies.

When antibodies come into contact with specific food proteins, this triggers the release of histamine. Not everyone will develop an allergy to common allergens, like dairy and egg. But when a food allergy develops, the body reacts when you eat that trigger food.

With the release of histamine during an allergic response, you can expect to see things like:

The most common ways to identify a food allergy are to use a skin prick test or a blood test that looks for IgE food antibodies. The current gold standard to confirm an allergy is with an oral food challenge.

In order for a food allergy to develop in the first place, you must first be sensitized to the allergen. This is when you are first exposed to the trigger food protein and go on to develop antibodies. During sensitization, there are no symptoms of a food allergy.

After sensitization, your next encounter with the trigger food will cause allergy symptoms. Usually, this happens rapidly.

But what causes sensitization in the first place?

We know that food allergy and related issues like eczema and asthma are becoming more common. But there are still a lot of unanswered questions when it comes to explaining how allergies arise.

The gut plays a role. Genes can also increase the risk of developing allergies. And so can the environment.

And then there’s the hygiene hypothesis – that we’re too “clean.” Suggesting that living with pets, livestock, or even older siblings can reduce the risk of allergies.

Where do vaccines fit in?

Many vaccines contain food proteins. And as we’ll talk about later, how they’re administered matters too.

The very act of injecting food proteins into the body – rather than ingesting them – may increase the risk of food allergies.

A vaccine works with your child’s immune system to educate it against infectious agents.

For example, when your child gets sick, special immune cells recognize the pathogen as an invader. Each invading pathogen contains antigens, which generate an immune response. Part of this immune response includes antibodies.

Once a pathogen is destroyed, the body stores antigens in the lymph nodes. This creates a “memory” of the infection and speeds up the body’s response so that next time it can release antibodies and quickly fight the invader.

A vaccine mimics an infection.

That said, we still don’t know all the ways that a vaccine interacts with the immune system.

This means that full safety cannot be confirmed.

Can vaccines cause food allergies?

The Institute of Medicine clearly says in a 2011 report called Adverse Effects of Vaccines that,

In other words, scientists have noted a relationship between vaccines and the development of allergies, including severe allergy known as anaphylaxis which requires immediate medical care.

For example, Tdap and DTaP vaccines contain milk protein. In children with severe milk allergy, these vaccines can cause anaphylaxis. In this case, the initial vaccine isn’t usually the problem.

Which means that sensitization occurs with injection into the body, when the food protein bypasses digestion. Then, when the time comes for a booster shot, a milk-sensitized child shows signs of food allergy.

Likewise, it’s also been shown that IgE antibodies to egg white can increase after receiving the flu vaccine.

Food proteins found in vaccines include:

Food proteins aren’t the only problem

In addition to allergenic food proteins from egg and dairy, vaccines contain adjuvants or “helpers.” An adjuvant stimulates the immune system and helps to make a vaccine more effective, maintaining immunity over a long period of time.

Manufacturers often use aluminum as an adjuvant, which unfortunately is also a neurotoxin. Aluminum can make the brain inflamed and may even lead to autoimmunity.

And in the case of food allergy, aluminum supports the production of IgE, making food proteins more allergenic.

We also see this in the case of peanut allergy: a vaccine containing an aluminum adjuvant leads to increases in cow milk protein IgG and peanut protein IgE, even with food avoidance. 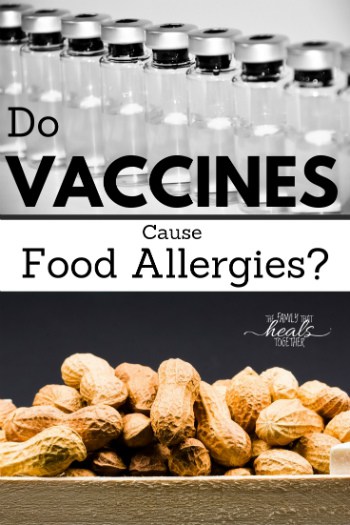 Even though there’s plenty of evidence to suggest that vaccines cause foods allergies – enough to at least warrant more caution – many parents feel pressured to get their child fully vaccinated.

Sometimes the connection is tough to pinpoint since food allergies might be diagnosed weeks or months after a vaccine.

Meaning that even though the vaccine caused a food allergy, it comes across as far less obvious than anaphylaxis.

With up to five vaccines given to a young child at one time, why aren’t we doing more to investigate the safety of food proteins and adjuvants in vaccines?

Did your child have an allergic reaction to food after vaccines? Share in the comments!