I’m not going to tell you that choline-rich foods can prevent things like ADHD, autism, or PANDAS – a disorder that you might mistake for autism. But I am going to tell you that getting good sources of choline into your diet while pregnant can certainly reduce the risk of these disorders. Read more below about why choline just might be one of the most important nutrients to focus on during pregnancy, breastfeeding, and early childhood. 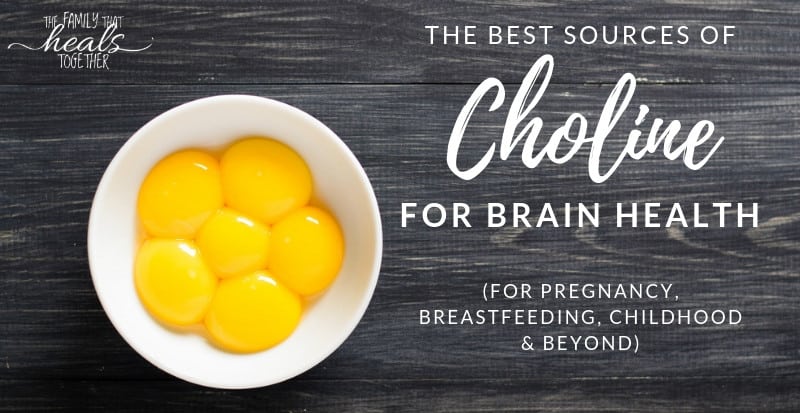 Can adequate choline intake during pregnancy really reduce the risk of autism, ADHD, and more?

Yes, choline is THAT important.

But if you take a look at prenatal supplements, you won’t find choline at all. Or, you’ll find only a small amount – far below the recommended 450 mg/day.

Choline is an essential nutrient. Which means that even though the liver makes choline, you must consume sources of choline to meet your body’s daily demand for this vital nutrient.

But what is choline and what does it for you? When you think of choline, think about the brain, the structure of cells, and healthy genes.

Similar to nutrients like folate and B vitamins, choline supplies something called a “methyl donor” that feeds into the methylation cycle.

When it comes to a healthy pregnancy and fetal brain development, a diet rich in methyl donors can shape the expression of your baby’s DNA and affect your baby’s health as an adult.

Besides that, choline and other methyl-donors influence:

For example, choline protects the body against inflammation and the effects of inflammation during pregnancy – like preterm labor, intrauterine growth restriction, and preeclampsia.

In animal studies, researchers have found that getting plenty of choline during pregnancy and while nursing can dramatically reduce anxiety and social behavior in offspring that mimics autism.

Likewise, in a follow-up study on mothers supplementing with twice the recommended intake of choline during pregnancy, researchers suggest that choline can safeguard against the development of ADHD, autism, and schizophrenia.

Do you need to worry about choline deficiency?

Choline accumulates in the liver, kidneys, brain, breasts, and placenta. During pregnancy and while breastfeeding, the demand for choline is exceptionally high.

For example, a mother’s body will move large amounts of choline to her baby through the placenta. By some estimates, the level of choline in amniotic fluid is ten times higher than a mother’s blood levels.

Research has found that when choline intake exceeds recommendations, outcomes are better for mother and baby. Animal studies have shown better cognitive function, a healthier placenta, and a better response to fetal stress.

But, there’s a problem.

Almost 90% of folks do not meet the adequate intake amount of choline.

Many prenatal vitamins don’t include choline. And there’s a good chance your doctor won’t tell you to seek out choline-rich foods.

Outright deficiency is rare since the body can make choline. But if you are pregnant or breastfeeding, there’s a good chance that you’re at risk for choline deficiency.

Genetics also matter. Some folks with genetic variants impacting folate metabolism or the production of choline will be at a great risk for choline deficiency.

Signs of choline deficiency are directly linked to what choline does in the body and where it’s stored. You may need more choline if you notice:

Sources of choline for pregnancy

The best sources of choline are animal-based foods.

During pregnancy, it’s a good idea to include foods high in choline like liver and egg yolks. Bite for bite, liver and eggs have the highest levels of choline along with other methyl donors, like folate and B vitamins.

Try this tasty, easy custard recipe to get your daily dose of choline-rich egg yolks!

In addition, if you’re not a fan of liver (sneaking it into recipes like meatballs and chili makes it way more palatable!), you can take it in supplement form (though keep in mind, you have to take lots of capsules to equal the same nutritional value as eating fresh liver). This is an excellent grassfed desiccated liver supplement.

Other good sources of choline include:

How to choose the best choline supplement

When enriching your diet with choline, start with food.

For example, when eating egg yolks, you not only get choline. But you also get carotenoids like lutein and zeaxanthin that support baby’s vision and developing nervous system.

In addition to eating choline-rich foods, it’s a good idea to take extra choline as a supplement during pregnancy and while breastfeeding.

When looking for the best choline supplement, you may come across:

For example, there’s evidence that supplementing with phosphatidylcholine can change the choline composition of breast milk and support a more robust immune response in babies when compared to choline bitartrate.

During pregnancy and while breastfeeding, shop for a fat-soluble choline supplement like phosphatidylcholine or lecithin.

Make sure your choline supplement is non-GMO and avoid soy-based supplements. Instead, look for sunflower lecithin, like this one from Seeking Health.

If you haven’t thought about choline until now

Choline just recently popped up on the radar of companies making baby formula and prenatal vitamins. And there’s a good chance that the current daily requirements for choline are too low.

So if you suspect you didn’t get enough choline during pregnancy, be kind to yourself. It’s not too late.

Little ones – especially those on the autism spectrum, with ADHD, or learning disorders – can still benefit from choline-rich foods and supplements.

What are your family’s favorite sources of choline? Share in the comments!