I started this blog just over two years ago to share about our family’s journey with healing behavioral disorders. Among my most popular posts are those that highlight our favorite natural treatments for ADHD, but I’ve also written about steps we’ve taken to heal PANDAS disorder. This post shares a little more in depth about what life with PANDAS is really like. 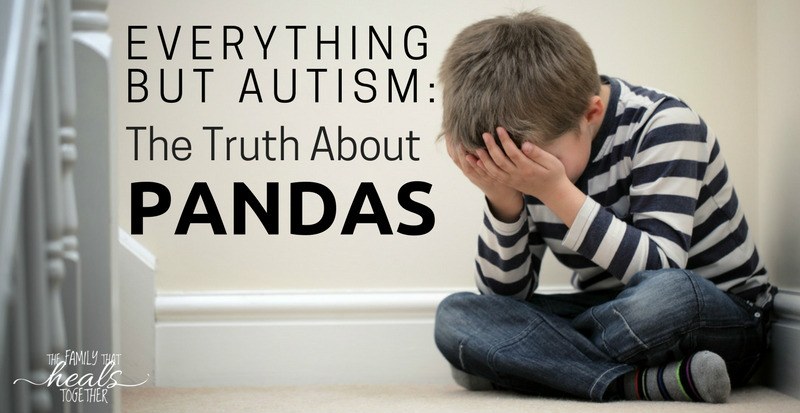 It’s been about two years since we learned my son and I both had strep overgrowth in our bodies. Unfortunately, the practitioner we were seeing at the time, though holistically-minded and somewhat helpful, was not experienced in PANDAS and didn’t give us a proper diagnosis… or treatment. I knew from my son’s test results and behavior, however, that it was PANDAS.

Not familiar with PANDAS? Let me introduce you.

What is PANDAS disorder?

PANDAS is short for Pediatric Autoimmune Neuropsychiatric Disorders Associated with Streptococcal Infections. In short, it’s a smorgasbord of psychiatric disorders caused by a strep infection.

But wait! PANDAS isn’t necessarily caused only by strep, and it doesn’t necessarily only affect pediatric patients. In other words, it’s highly complicated and poorly understood by the majority of medical professionals (the ones that have even heard of it or recognize its existence).

PANS (Pediatric Acute-onset Neuropsychiatric Syndrome) is the generally recognized label for the same symptoms in a child without the association of a strep infection. It may be attributed to an infectious trigger, environmental factors, and other possible triggers which create a misdirected immune response, resulting in inflammation in a child’s brain. (source)

How does strep cause psychiatric conditions?

When the immune system is not functioning correctly (whether from a previous insult to the system, an environmental trigger, or genetic predisposition), a strep infection can go from being an ordinary childhood illness to a long-lasting disease.

In PANDAS children, the infection may pass the blood brain barrier, resulting in brain swelling (aka encephalitis) and, eventually, causing the immune system to attack the brain, making the condition auto-immune in nature.

PANDAS disorder causes a variety of symptoms which masquerade as mental illness. Some of these symptoms include:

Children suffering from the disorder will experience varying degrees, and likely a combination, of the above symptoms and behaviors.

Our family’s experience with PANDAS

My son has every symptom on the above list and more.

I knew it was PANDAS from the moment I read about it.

While my son has exhibited symptoms of hyperactivity from the time he could walk, his most worrisome behaviors began following an acute illness. Almost six years ago, the kids and I got sick with some sort of respiratory illness. It took us weeks to recover.

My son had the worst time recovering, and his fever persisted much longer than anyone else’s.

After the fever and nasty cough left, my son was different. He’d become defiant and disrespectful. And he had a weird new habit of making a soft sighing sound in the back of his throat.

If I struggled with parenting my high-strung, hyperactive child, I had no idea how to manage a child with these new and worsening behaviors. What do you do with a child who refuses to obey and does not respond to ANY form of discipline?

I figured if I just got firmer with my son, he’d straighten up.

When he was six, a light swat to his behind resulted in him slamming his door on me and hurting me. I knew then that corporal punishment would never be effective for this child.

When we had friends over to play, he was mean to the other children, and would hurt them and call them names. I was horrified and so ashamed of what other moms must’ve thought of me.

I was doing everything I knew to help my child: he was already on a strict diet and I enforced rules as best I could. I felt so helpless as his behavior worsened.

I began putting the pieces together and realized he had every symptom of oppositional defiant disorder. It wasn’t until some time later when a stool test showed he had an abundance of strep bacteria in his gut that I knew it was PANDAS disorder, and despite the clueless doctor we were seeing saying it wasn’t PANDAS, I knew better.

It’s not normal for a child to become incensed over the color of his plate.

It’s not normal for it to take a child (particularly a very bright child- which he very much is) hours to write a single sentence.

It’s not normal for a child to become so angry about being disciplined that he lashes out and hurts his parent.

It’s not normal for a child to not be able to touch a paper towel because he can’t stand the way it feels, or certain clothes or bedsheets for that matter.

It’s not normal for a child to have a meltdown about something minor, becoming so angry that you fear for his or others’ safety, only to have him flip a switch and become completely pleasant a short time later.

It’s not normal for a child to make constant throat clearing or heavy breathing sounds, blink excessively, or have other strange, repetitive behaviors over which he has no control.

I could go on and on, but the point is, we battled all these behaviors (and worse!) for years while I beat myself up (truthfully, I still do) about it. If I was a good mom, why did my kid act like such a jerk?

The truth is, kids with PANDAS disorder (or PANS) can’t control their emotions or behavior. Their brains are on fire. They simply can’t help it. That’s the truth.

But here’s the frustrating thing, and if you’re a PANDAS parent, I know you know what I mean: PANDAS is hard to explain, particularly to those questioning both your parenting and your child’s behavior.

I’ve given so many excuses: “well, he has some symptoms of autism;” “he has severe ADHD;” “he has oppositional defiant disorder (yes that’s a thing; no it’s not an excuse for poor or permissive parenting);” “I really do discipline him; really! He just doesn’t listen;” or, my favorite, “I’m sorry, he got into some gluten yesterday.” 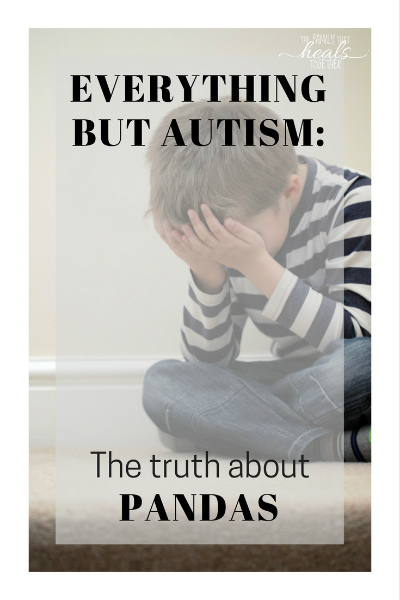 While autism is a “spectrum” because symptoms and their severity can vary widely, many of those symptoms overlap with symptoms of PANDAS as well.

Everyone knows what autism is, and lots of folks sympathize with autism parents and give them a break for their kids’ behavior.

And not that I’m trying to have a pity party or anything, but I can’t exactly say “I’m sorry, my child has PANDAS.” No one knows what that means.

And while both well-meaning friends and judgmental strangers have let me know that what my kid really needs is a swat, what they don’t know is that my kid can’t help it, and I really am doing the best I can. Besides, a swat wouldn’t help anyway.

How is PANDAS treated?

Thankfully, PANDAS doesn’t have to be forever, and if you find a knowledgeable doctor, you really can heal it. We’ve gotten rid of the symptoms before using natural remedies, but because PANDAS is such a complicated and persistent disease, we’ve decided to incorporate some conventional methods at this time.

We’re continuing to use our favorite and most helpful natural remedies, which at this time (keep in mind, this is always a moving target), include:

While these natural remedies help with some of the symptoms, what we really needed at this point was a doctor who was knowledgeable about PANDAS disorder.

We’ve been so fortunate to find such a doctor (who, by the way, did confirm a PANDAS diagnosis) and, though it’s been a rough month as we’ve navigated treatment and I’ve gone from trusting only myself to treat my son’s symptoms to relying on a doctor who knows much more than me, I’m confident we’ll finally resolve this horrible condition once and for all.

To find a PANDAS specialist near you, look at this list of US providers.

Does your child have PANDAS disorder? How have you navigated this tricky disease?