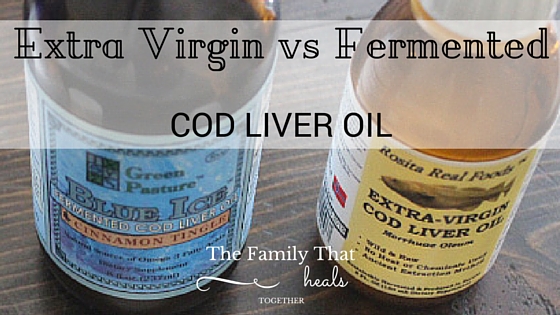 I was given a bottle of Rosita Real Foods extra virgin cod liver oil to try a while back, but for this post, I purchased both oils with my own money.

Let’s just get this out of the way first! This was a main point of interest for me when I was considering making the switch from fermented (fclo) to extra virgin cod liver oil (evclo). Corganic’s Rosita Real Foods Extra Virgin Cod Liver Oil is $49 for 150 ml, while Green Pasture is $44 for 237 ml. Green Pasture’s group buy discount does save a significant amount when you buy 12 bottles. The cost comparison is what initially caused me to choose to stick with fclo. However, I have since determined that we can get by on taking lesser amounts of the evclo because of the higher vitamin content (more on that later). Furthermore, as this article by Dr. Ron Schmid concludes, too much of a good thing, is not a good thing. So, I focus on cod liver oil in the winter months, when we are unable to soak up much sunshine, and give it to my family occasionally in the warmer months, particularly if someone is fighting off sickness. I recently discovered that my oldest doesn’t tolerate cod liver oil at all at this point, though I’m hopeful that will change soon, as the omega 3 fats are essential for brain health.

Extra Virgin Cod Liver oil is a precious commodity and should be treated as such, rationed out as needed and savored for the healing benefits. I only give my children about 1/4 tsp at a time and my husband and I only take about 1/2 tsp. I will reevaluate these dosages when sunshine is more scarce. Because we are battling vitamin D deficiency (I was under the impression that taking fclo would prevent vitamin D deficiency, but after taking it for years, my son and I were both found to be lacking this past spring), we take an additional extra strength vitamin d3 supplement. Our practitioner informed me that for deficiencies, cod liver oil does not contain significant enough amounts of vitamin D to raise levels as much as concentrated supplementation. Most importantly, however, is that we can take less of the evclo because it has higher vitamin concentrations than the fclo.

Another extremely important factor is taste! If you can’t bear the flavor of a supplement, you are not going to take it and it will be a waste of money. After taking cinnamon flavored fermented cod liver oil for years, we became accustomed to masking the fishy flavor. However, after learning that Green Pasture uses essential oils to flavor their cod liver oil, I was alarmed that we had been taking it internally for so long! Not only that, but the type of cinnamon oil used (cassia) is known to cause skin irritations and allergic reactions. No wonder when I would give it my littlest guys their skin would always break out in red splotches around their mouths.

So, all flavoring aside, when testing the flavor of both the evclo and the plain fclo, the evclo had a cleaner, smoother taste. The fclo has a bit of a burn in the back of the throat when going down, while the evlco, though strongly fish-flavored, does not. It just tastes clean. None of my kids complain about taking the evclo (though, admittedly, they did get used to the fclo as well), and no one’s skin breaks out following a dose. I chase my dose with some water because I don’t like fish, but my kids, who all enjoy eating fish, don’t need a drink with their evclo.

There has been significant focus on the color of fermented cod liver oil since Dr. Daniel’s study was released, and for good reason! Since learning a little more about the process Green Pasture uses to ferment their cod liver oil (who am I kidding? The process is shrouded in secrecy!), we now know that the reason for the dark color of fclo is because it “ferments” in large vats for long periods of time, and this darkened color is likely due to rancidity. Look at the picture below to compare colors of the two: 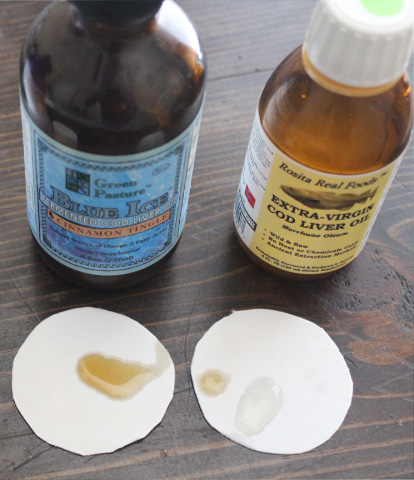 You can see the fclo on the left has a darker color (note that I dripped a small drop on the circle on the right by accident!), while the evclo on the right is almost unnoticeable on the white background. But what do these color variations really mean?

And now we arrive at both the greatest source of controversy and the most important point in determining which oil I choose to give my family: the manufacturing processes of both oils. Because Green Pasture is notoriously tight-lipped about their process, I am summing it up the best I can, according to my understanding.

On their blog, Green Pasture briefly describes their fermenting process, saying “A word on our process: our simple process uses salt, fish broth starter, and livers. We do not dilute our oil, add anything, or use molasses, other sugars, or algae. I know it sounds too simple but it is exactly as we describe. No different than fermented fish sauce or pickled fish products….” Unfortunately, this explanation leaves a lot of questions unanswered. If they do not use a sugar of some kind, we are left wondering what is in the “fish broth starter.” Here, Green Pasture details how other seafoods are fermented, citing the health benefits of foods like pickled herring, and applying them to fermented cod liver oil. There are a few problems with this. For one, traditionally fermented foods, whether herring or vegetables like sauerkraut and pickles, often use water-submerging techniques (though not always). Sometimes a starter culture is added to assist the fermentation process, but because vegetables and whole fish contain carbohydrates, the naturally-occurring bacteria have a food source to grow and preserve the food being fermented.

Oil does not contain carbohydrates and can therefore not be fermented. Because Green Pasture does not reveal what is in the fish broth starter they use, we cannot know what the food source of the bacteria may be, and are left to draw the conclusion that perhaps Dr. Daniel’s study was accurate: fclo is not fermented after all, but is, in fact, rancid. Lending to this conclusion is the fact that Green Pasture says that their products are shelf stable for up to four years, but just to be safe, they label them as shelf stable for two years. Live foods cannot be left out for advanced periods of time without rotting, which leads me to believe that the product has already gone bad once it’s bottled. We have no idea how long these livers are left to “ferment” or what is used to “ferment” them. And, if one attempts to look up “fish broth starter,” one will be inundated with results for fish soup and broth recipes. I personally know that I can’t leave broth or soup out on my counter for more than a day before it starts becoming rancid. How is it that a “fish broth starter” is used to ferment cod livers? If Green Pasture would like to clear up these questions once and for all, I (and countless others!) would love some answers.

Rosita Real Foods evclo, in contrast, depends on speedy processing to avoid loss of nutrients. According to Rosita’s Web site, “Ideally, the rendering process should begin immediately following the removal of the fresh livers and at least before putrefaction has commenced. This results in the lightest coloured oil.” As shown in a video posted to the site, the cod are caught, killed, and the livers extracted, all in a short period of time. The livers are immediately allowed to sit, undisturbed, until the oil has drained from them, and this raw oil is then bottled quickly to preserve nutrients and freshness. As stated in the video, they then add “a tiny bit of antioxidants [vitamin e and rosemary] to the oil to preserve freshness.”

The two companies have opposite processes and goals in mind in manufacturing their oils. Green Pasture goals to allow the oil to sit for extended periods of time, while Rosita places the highest importance on quick processing and bottling. You can draw your own coclusions, I’m sure, about the colors of the oils. But how do these different manufacturing processes contribute to nutrient content?

Finally, we approach the vitamin content of the oils, most notably vitamins A and D. Because cod liver oils generally don’t state how much of each vitamin is contained in their product on the label (due to naturally varying amounts), we have to do a little detective work.

The main vitamins found in cod liver oil are vitamins A and D. The important thing to note, however, is the ratio of vitamin A to vitamin D, as an imbalance of too much vitamin A can be toxic without sufficient vitamin D to accompany it. While both oils contain 3000-5000 iu/tsp of vitamin A, evclo contains 400-500 iu/tsp of vitamin D, while fclo was found to contain only 78-211 iu/tsp. [sources 1 and 2] For this reason, I can justify the higher price and lower dosage of the evclo.

Clearly, you can see which oil I have chosen for my family, after having extensive experience with both brands. Obviously, there are other cod liver oils on the market, but most others are cheaply processed and priced, and are not something I would spend money on as an important supplement for my family. As I learn more about these products, I make changes and do the best I can for my own family, as you do for yours. Be sure to read more in depth about why we made the switch to evclo here.

Have you taken either of these oils? What has been your experience? 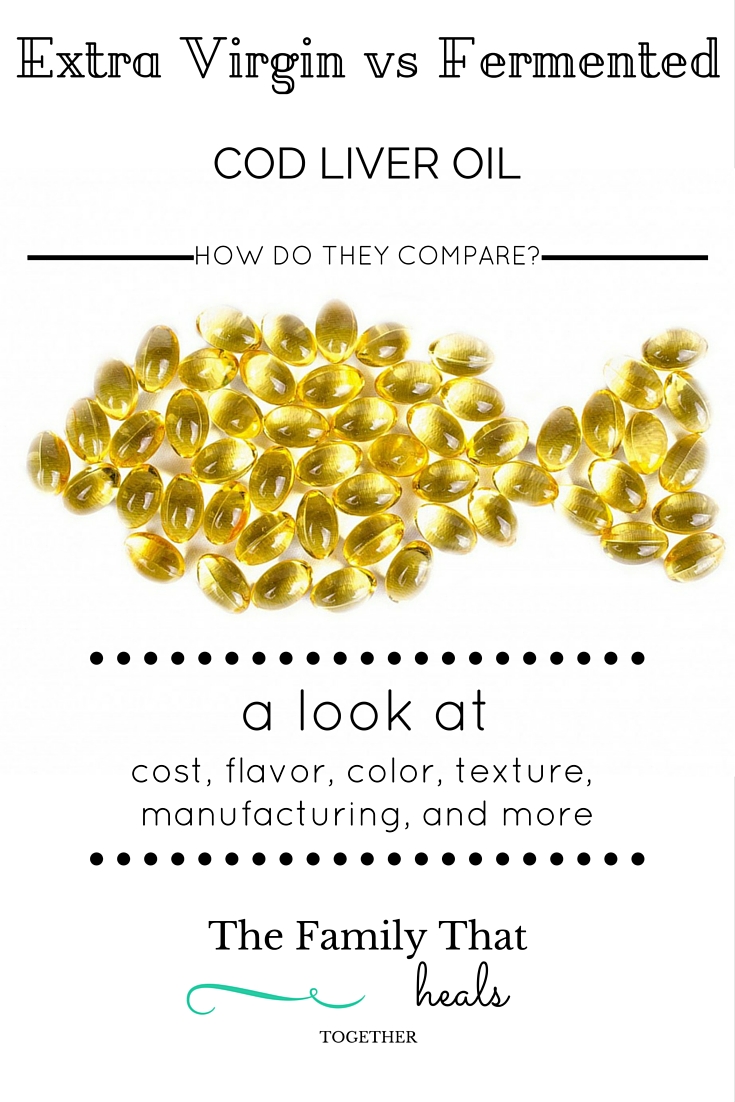