Trying to figure out how to stop tics naturally? As it turns out, tics and other childhood brain disorders have a common root: inflammation in the brain. Whether the cause is genetic, autoimmune, or an infection – you can support your kid’s behavior with diet and supplements. 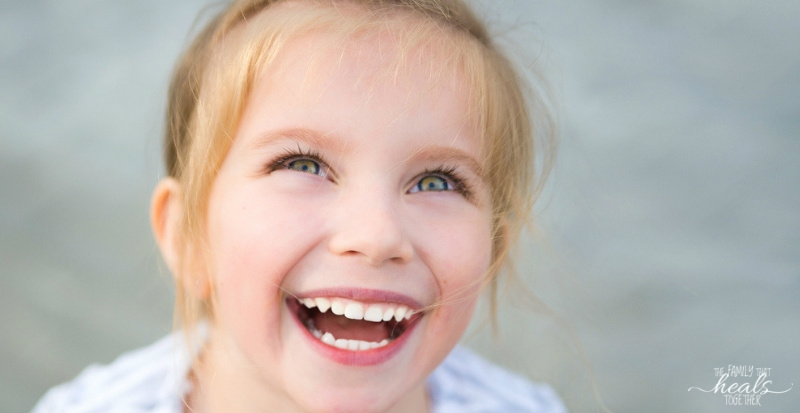 The first time I noticed my son had developed a tic disorder, I was terrified. Clearly, there was something happening in his body that he had no control of. It started around the same time he developed PANDAS symptoms, following a respiratory illness.

It was subtle, but there was no doubt, he was making a soft sighing sound at times when he otherwise should not have been making a sound: while sitting quietly watching TV or reading a book, for instance. I had no clue what this new and puzzling symptom was, but I knew it was neurological in nature, which was the scariest thing of all to me.

Since that initial development of tics, my son’s tic disorder has come and gone, usually after careful and deliberate supplementation. They have shown up as an eye-widening tic, a blinking tic, and a throat clearing or vocal tics at varying times, but no doubt, they are the worst when he is battling the most inflammation.

Not sure if what your child is struggling with might be a tic? Read on.

What is a tic disorder?

When your child has a tic, you see the body move suddenly and uncontrollably. Movements appear non-rhythmic and repetitive.

Tics that involve movement are called motor tics. Most cases start with simple tics like eye blinking and progress to more complex tics. Examples of simple motor tics include:

Tics that involve sound are called vocal tics. Vocal tics tend to begin one to two years after the onset of motor tics. Examples of simple vocal tics include:

A tic disorder diagnosis is based on what type of tic your child has – motor, vocal, or both – and how long you’ve noticed it. Under one year and your child would have a provisional tic disorder. Over a year, and the diagnosis may be chronic tic disorder or Tourette’s syndrome.

Provisional tics are common and can affect up to 10% of kids. Chronic tic disorders – including Tourette’s syndrome – can affect 2% – 4% of kids.

For kids experiencing tics, they can feel them coming. It might start with an itch or a sensation in a particular muscle group. If a child attempts to stop a tic from happening, the sensation or itch may build up in intensity.

Tic episodes happen in clusters. In other words, they get worse, better, and then worse again as time passes. This waxing and waning of tics can happen at least three times a year.

Parents of kids with tics notice that tics tend to increase when their child feels tired or stressed. They also happen more often or with more intensity towards the end of the day.

What causes a tic disorder?

Officially, tic disorder causes are TBD – or to be determined.

But with that said, researchers have found interesting clues that can help parents learn how to stop tics naturally.

For example, there’s good evidence that the development of a tic involves the immune system. Mothers of kids with tic disorders are more likely to be diagnosed with an autoimmune disease like ulcerative colitis, rheumatoid arthritis, or multiple sclerosis.

How is this possible? Researchers suggest that antibodies moving through the placenta may be responsible for tics along with other related disorders, like OCD. These antibodies may activate the baby’s immune system and affect normal brain development.

In children with PANDAS and tics, the likelihood of autoimmune disease in the mother is even higher.

Moms, this does NOT mean that your kid’s tics are your fault. But it does give us information on how to stop tics naturally (more on that in the next section).

In addition to maternal autoimmunity, you’re also more likely to see autoimmunity in a child with tics and OCD. This includes autoimmune diseases like:

Non-streptococcal triggers like other bacteria and viruses can also activate the immune system and show up with tics and other neuropsychiatric disorders.

More likely, we’re seeing the effects of a cytokine storm.

When you flip through the medical literature and listen to stories from other moms, you may notice that tics tend to show up with other disorders beyond autoimmune disease in the mother. This includes:

For example, roughly 65% of kids with Tourette’s syndrome are diagnosed with ADHD. Over half these kids also have signs of obsessive-compulsive symptoms while 30% can be fully diagnosed with OCD.

Do you think that any of these disorders have something in common?

It appears that they do.

Even in the case of ADHD where the cause is unknown, researchers working together at the University of Texas have found that an increase in inflammatory markers correlates with the severity of ADHD symptoms.

This means that the immune system plays a role. And if you can work with your child’s immune system – whether the root is genetic, autoimmune, or an ongoing infection – you can stop tics and reduce other signs of inflammation.

How to stop tics naturally

Learning how to stop tics naturally is as easy (and difficult) as figuring out what triggers inflammation in your child’s body. It’s also about making sure your kid has the right nutrition to fight infection and soothe inflammatory fires.

1. Follow a gluten-free, casein-free diet. For this to work best, make sure that the whole family is on board. Both gluten and casein are major triggers of autoimmune disease and it’s essential to remove them from the whole family’s diet.

3. Make sure your child takes a daily DHA supplement. Omega-3s are anti-inflammatory and excellent for brain health. When it comes to omega-3s, plant and seed oils won’t cut it. For example, flax oil is poorly converted into long-chain omega-3s and do little (if anything) to raise DHA levels. (Read more about the truth about omega fats here.)

Get my favorite DHA supplement here.

4. Remember to include choline-rich foods. If you follow a restricted diet, eggs may be off the menu. They’re a common allergen and trigger food. But egg yolks are also the easiest way to get choline in the diet. Choline is critical to a healthy, happy brain. If eggs aren’t an option, be sure to include other choline-rich foods.

5. Use Smidge Probiotic. Why probiotics? Because the gut-brain axis is a real thing. And a healthy gut means a happy brain.

But not all probiotics are created equal. Smidge is free of fillers or prebiotics and it gently supports your child’s immune system. Most importantly, it’s free of probiotic strains that produce histamine – a pro-inflammatory compound that the body works hard to get rid of.

You may already know that there is no single supplement or cure that will forever stop tics.

Stopping tics and other disruptive behaviors is really about managing the underlying conditions that your child lives with. It’s also about creating a positive experience around these changes.

Being different – especially for a kid – can be rough. Whether it’s the actual tic or needing to reinforce a gluten-free diet for the sake of better health, how you frame each experience matters.

So stay flexible and stay open to discovery.

As the body changes, your approach will too. That’s okay.

Encourage your child to check in with how he feels after eating an “off limit” food or skipping supplements. Explain why these foods are off limits or what probiotics do in the body. And allow him some room for making mistakes and making his own decisions.

As you and your child figure out ways to put out inflammatory fires with diet and supplements, be sure to also talk with your child about the importance of self-love and even humor when a tic shows up in public.

After all, laughter is the best medicine.

Not only does laughter combat inflammation, but it also helps your child celebrate differences rather than feel ashamed of them.

What have you done to stop tics naturally? Share in the comments!