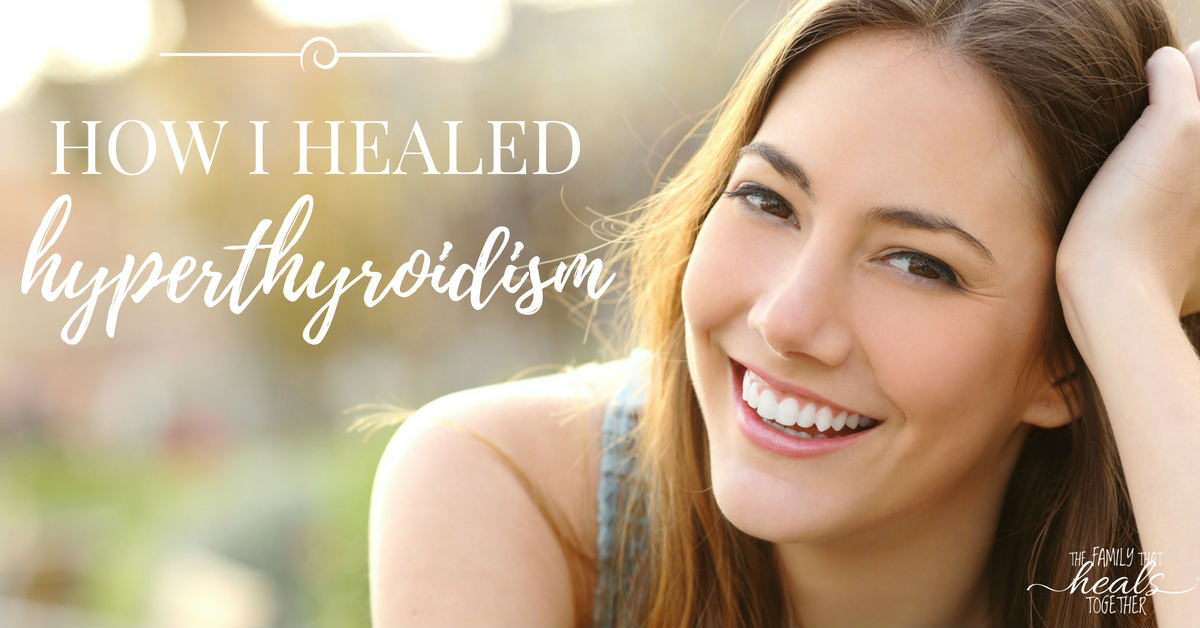 It’s been about 10 years since I was diagnosed with hyperthyroidism and then quickly became pregnant with my first son. I am so thankful to be able to say that I no longer suffer from hyperthyroidism! I used diet to heal my thyroid, and, below, I’ll give you all the deets on my holistic hyperthyroidism treatment.

Having never taken care of my health and eaten a processed diet my entire life, by the time I began really abusing my body in my teens and early twenties, I had no nutritional stores to rely on. I became totally depleted and started having outward symptoms of hyperthyroidism, which include:

So here I was, 21 years old, when I should’ve felt like the energizer bunny, but instead, I had such debilitating fatigue that I could barely function. Thinking I was having a mono flare (read about my experience with epstein barr virus, the virus responsible for mono here), I went to the campus health clinic, where I had blood work done.

When I returned, the doctor was somber: I had a condition which required medication, for which there was no “cure,” and now I had a pre-existing condition sans insurance. I had an overactive thyroid, or hyperthyroidism. The doctor offered me no hyperthyroidism treatment and sent me on my way.

So I did what any invincible 21 year old does; I pretended I was fine and went on about my business. Then I had some kids.

After baby three, despite eating healthier and living a more natural lifestyle, I found myself suffering from the worst fatigue of my life, frequently experiencing vertigo, having horrible mood swings, and even developing early symptoms of multiple sclerosis: I began to get tingling and shocking sensations in my hands after busy days of house cleaning and dish scrubbing.

I already ate as well as I knew how; I was taking the time to sprout and grind my own wheat berries for crying out loud! I also knew I didn’t want anything conventional medicine had to offer me; I’d been down that route with little help.

I decided it was time to come up with my own holistic hyperthyroidism treatment. Over the next 3-6 months, I radically changed my diet, one thing at a time, until I felt better and better. Here’s how I did it.

I took several steps in healing hyperthyroidism, and each one helped in its own way, however, the combination of all of these diet changes is what really worked to heal my hyperthyroidism.

The very first thing I did in an effort to feel better was to cut the junk. I had already done that prior to my third pregnancy, but clearly it wasn’t enough. However, it was an integral part of getting started in the right direction. I cut out:

Eventually, I switched over to as much organic food as I could find and afford, including bread, crackers, and granola bars, before finally making absolutely everything from scratch. I honestly didn’t feel much better even with these changes, though. (The biggest improvement with these changes came in the form of better behavior from my kids. Read more here.)

I was elated when I finally found someone I could get raw milk from. Switching from pasteurized to raw milk was a huge turning point for our family.

Pasteurized milk had always made me feel sick and sometimes made me physically ill. I hardly ever drank it, which meant I was missing out on the nutrition that real milk had to offer. Once I switched to raw milk, I found that I actually liked milk (which I had never done- even as a kid). I began to crave it and it didn’t make me sick anymore.

Even better, my son tolerated raw milk, while pasteurized milk sent him into rages and caused other ODD– like behaviors.

After my third son was born and I seemed to be feeling worse than ever, I was ready to make some serious changes. Remember, I was already eating whole, real foods, drinking raw milk, and even soaking and sprouting my grains using traditional methods. But I had a major problem: a major sweet tooth.

I still made all my favorite goodies, with my homemade sprouted wheat flour and organic sugar. I decided to try a 30 day challenge with no sugar. It was so much easier than I had anticipated- honest! I swapped out cane sugar for sweeteners that are easier on the body: honey, maple syrup, and coconut sugar. See my guide to sugars here for a thorough breakdown of the good, bad, and ugly of sweeteners.

I felt a little better and more energized.

Give up the grain

After I saw how easy it was to cut out sugar, I had to try cutting grains.

I had been reading about how much better people were feeling off grains, but I was convinced it wasn’t for me. I was already eating so healthy, how could cutting out grains make any difference? But then I kept reading about how people who were suffering from the same conditions and symptoms as me were healing them by removing grains from their diet. Could going grain-free be the missing link to my hyperthyroidism treatment?

It turned out, it was the missing link. It was everything I hoped for and more. Five days after removing grains from my diet, I felt like the clouds parted and the sun began shining. The debilitating fatigue was relieved and I had more energy than ever. Migraine headaches lessened in frequency. The concerning shocking and tingling sensations went away. I felt… happier. And more clear-headed than I had my whole adult life. The constant bloat I’d experienced after every meal and snack disappeared and I enjoyed a flat tummy.

I had originally planned to cut grains for only a month as a trial, but it’s a lifestyle I’ve stuck with for years now, because it’s how I feel best. It’s also best for my son who struggles with behavioral disorders.

Legumes (beans, lentils, and peanuts), have some of the same problematic components as grains: difficult-to-digest proteins, nutrient-robbing phytates, and gut-destroying lectins. I eventually figured out that I reacted to peanut butter, and ended up cutting legumes altogether. This decreased my incidence of migraines and brain fog, as well as eased remaining digestive discomfort.

You may notice that the diet changes I made sound an awful lot like a popular diet. That’s because my ideal diet happens to mirror what’s known as the paleo diet, although a strict paleo diet would eliminate dairy altogether. I’ve found that since our family tolerates raw and cultured dairy, and that it offers tons of nutrition, we haven’t had a reason to eliminate it completely.

On top of those crucial diet changes (which I credit for getting me 90% healed), I’ve also taken some good supplements, which I think everyone can benefit from:

Between a serious diet overhaul and some key supplementation, I was able to heal my hyperthyroidism and accompanying symptoms. Later, when I decided to delve deeper and heal remaining underlying conditions, I did the GAPS diet for even more healing, and took more targeted supplements for things like Lyme disease.

While I’ve still been working to heal my remaining symptoms (quite successfully, I might add- I’m probably 80-90% better overall and some days I feel 100%!), when I had blood work done last year, I learned that just after implementing the above diet changes and utilizing only minor supplementation, my thyroid disorder had been healed. My practitioner was able to report that my blood work no longer showed indications of hyperthyroidism.

That alone has been worth every forfeited dinner roll and slice of pie. (But don’t forget- I wrote a whole cookbook full of grain-free recipes, including pies and dinner rolls, just in time for the holidays! Check it out here.)

Do you need a hyperthyroidism treatment? Start with diet! Be sure to share this post for other mamas struggling with a thyroid disorder. 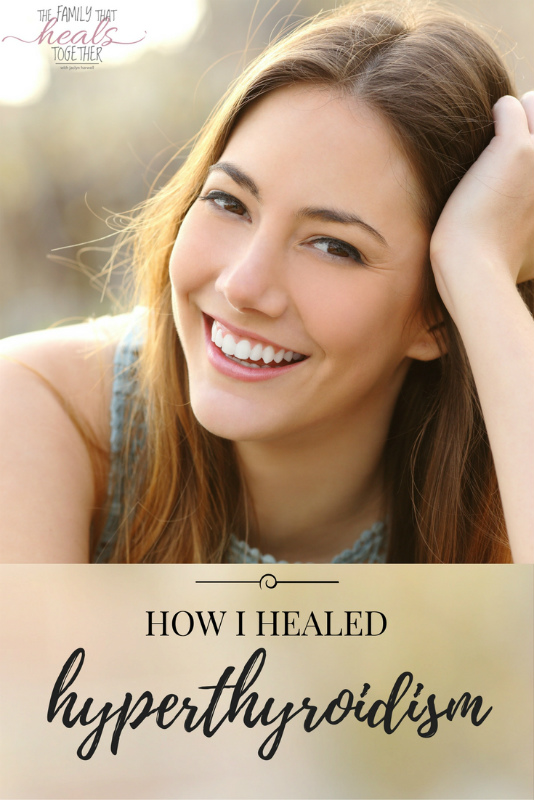 Heavy Metal Toxicity: How to Help Kids Detox
How To Treat Viral Infection: Do You Need a Viral Detox?