If you have a child exhibiting symptoms of defiance, anger, rage, and more, these tips for a holistic oppositional defiant disorder treatment are for you.

The anger. The yelling. The tears. The mood swings. And I’m just talking about the behavior of the mama of a child with Oppositional Defiant Disorder. I kid, but let’s be honest, having a child with ODD is hard on the whole family. If you’ve read how we healed symptoms of PANDAS, it will come as no surprise that we’ve taken a holistic approach to our oppositional defiant disorder treatment.

The symptoms of ODD and PANDAS actually overlap a lot, and though they have two different clinical names, the white coats tend to be behind on the fact that emotional and psychiatric disorders are caused by underlying infections. For our son, it was all wrapped up in a strep infection in his gut.

I had made the obvious connections with diet and pinpointed reactions to food (read about one surprising trigger food here), but it was years after the onset of his ODD symptoms that we had testing done which revealed the strep infection. That was when the real work started.

If you’re living with a child with symptoms of oppositional defiant disorder, you’re probably at your wit’s end, wondering what you can do to help your child.

Indeed, our son had all these symptoms and more. Thankfully, at the onset of his symptoms, our family was already interested in healthful eating and natural remedies, so a holistic oppositional defiant disorder treatment wasn’t a stretch.

Earlier this year, we rid our son of ODD for the first time since the whole ordeal started (he developed symptoms following an illness when he was four, which is associated with PANDAS).

Here’s what we did.

In a disorder like ODD, a couple of things are happening behind the scenes. For one, the child is reacting to triggers in his environment: food and other toxins like mold and chemical exposures like laundry and cleaning supplies or home fragrances.

Children with ODD and related disorders (think of children on the autism spectrum, which is inclusive of a huge range of behaviors) are very sensitive. If they have a steady stream of toxins entering their body, their body will stay bogged down and their neurological and emotional health will be compromised.

Not only should you switch to natural products in your home, but it is very necessary to change the diet of a child with ODD.

We started with removing these five ingredients. Following the removal of harmful food additives, we removed refined sugars (see my guide to sugars to learn about acceptable replacements), then gluten and all grains, as well as processed dairy (we eat high-quality dairy which is raw, cultured, and grass-fed), and, eventually, we did the GAPS diet.

Changing our son’s diet got us 75% of the way to healing. The only problem was that he could not tolerate any cheating. Even a small amount of residue resulted in a meltdown.

After we found out about the strep, we tried lots of options for a natural oppositional defiant disorder treatment. Some were helpful, but most waned after time.

I wrote about how we used diatomaceous earth, oregano extract, and intestinal tract defense to rid our son of PANDAS symptoms. Following our success with those remedies, I added in what I now call the “game-changer.”

At the beginning of last year, we saw a holistic PA, who did the testing for us that revealed the strep infection. He also put us on a supplement called Liver Life from BioRay. I noticed an immediate improvement in both my and my son’s health after taking this liver support. It contains mushrooms and other nutrients to support detoxification of the liver.

When I learned that BioRay had come out with a children’s line of supplements, my interest was peaked, because I had already been impressed with Liver Life. One day, while browsing the supplements section, I came across one of their children’s supplements, called “Happy.” A tag on the bottle caught my eye: “formulated for unreasonable anger.”

I took the bottle home that day and started my son on it immediately (in fact, I’m pretty sure I gave him his first dose in the car). I noticed an improvement in his overall demeanor after just one dose.

I began giving him the maximum dose twice a day and he became more pleasant and helpful, and all traces of anger vanished.

Even in the midst of choosing joy over a strict diet, his symptoms of ODD stayed away.

Happy contains a unique blend of liver and immune-system supporting mushrooms, as well as chlorella, which supports detoxification, plus herbs that support the removal of unwanted organisms, like bacteria, viruses, and parasites. Most importantly, it has been clinically proven to reduce angry outbursts.

This formula is so powerful for removing infections that a couple of months ago, when several members of our family came down with a stomach bug that lasted for weeks, it was the only thing that finally stopped the symptoms. I had tried everything I knew of to help my family get better, and finally, on a whim, I gave Happy a try, and after one dose the stomach bug was finally abated.

Why every kid needs BioRay

Our kids are constantly fighting an uphill battle. Not only do they get bombarded with junk food everywhere they go, but our modern air and water are tainted, and they are frequently given unnecessary pharmaceuticals.

Every supplement in the BioRay kids line contains their formula they call “NDF” (natural detox factors), which is comprised of chlorella, an effective and natural ingredient for detoxification.

Each BioRay Kids formula combines chlorella with a blend of mushrooms, as well has herbs that are targeted to relieve a variety of symptoms.

So far, our family has used Happy, designed to alleviate unreasonable anger, Calm, designed to ease anxiety and nervous energy, and Focus, created to boost attention and improve clarity and cognitive function. Each of these formulas do what they say they do!

Please note: BioRay is not paying me to say any of this. I have just been so incredibly blown away by their unique formulas that I want every family to learn about and benefit from them. Their formulas address just about any symptom a child may be dealing with.

These formulas have done things for my son’s health that no other supplements have been able to: they provide effective, broad-spectrum,yet targeted results.

I’m finding it necessary to keep my son on these supplements, particularly as we’ve enjoyed a summer of fun foods (though fall will be bringing balance back to our diet).

BioRay sums it up well: “As parents, we’d like to think the safest place for our children is at home. However, now with environmental toxins in the food we eat, the water we drink and the air we breathe, we have to do more to ensure our kids are able to grow up healthy and happy. Did you know environmental toxins can impact how our children behave, think, interact with others and even how healthy they are?”

Because our kids are constantly exposed to toxins, keeping my son’s body healthy is not a “once and done” situation. If we go long between bottles of Happy, his symptoms start creeping back, particularly if we’ve indulged too much in birthday party food, or he spends lots of time in a new environment, which tends to stress him out and spur on symptoms. I plan to continue his oppositional defiant disorder treatment indefinitely.

Have you discovered an effective oppositional defiant disorder treatment? Share in the comments, then be sure to share this post for your friends whose children may be struggling with ODD. 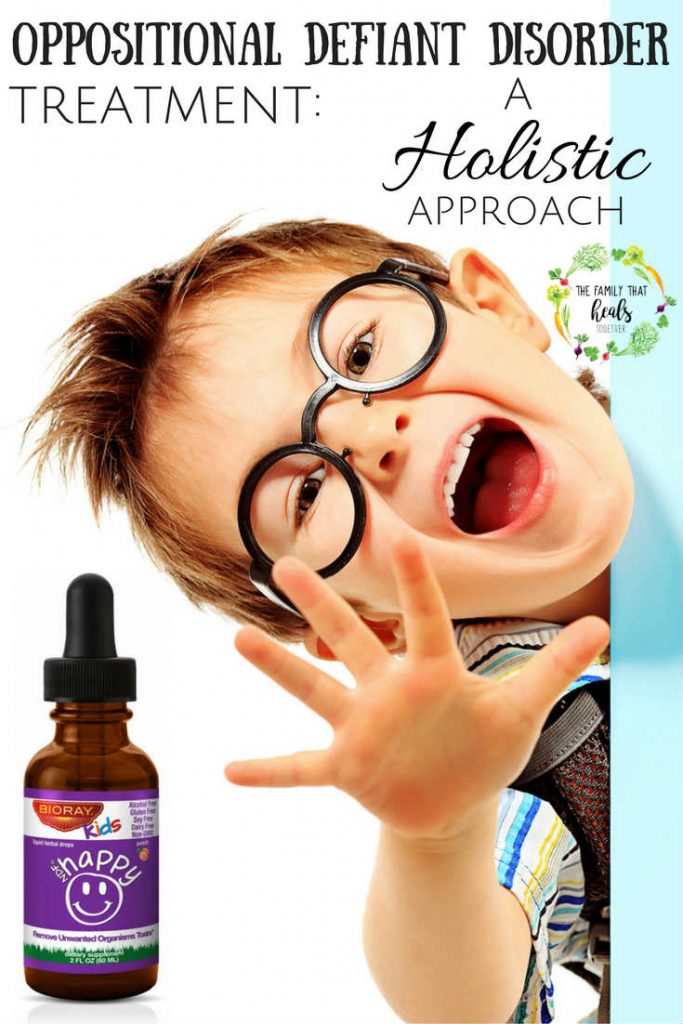