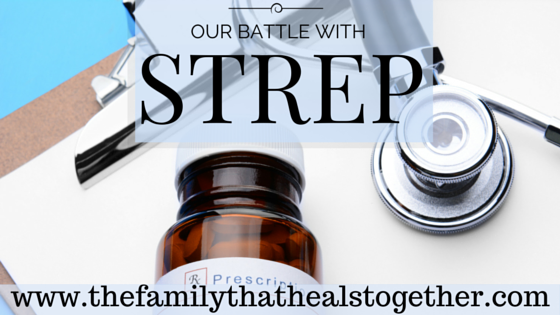 If you’ve read our story, you know that we are battling strep… but what does that really mean? A few months ago, we had testing done via stool, urine and blood, and found out that Camden (8), had strep overgrowth in his gut, and that I had it in my gut, too, and that it had colonized throughout my body. The strep had taken such root that the good probiotics we were taking were not colonizing. We had SIBO: Small Intestinal Bacterial Overgrowth, which had led to leaky gut, which had led to lots of other problems.

I began a one month treatment of azithromycin, followed by an herbal medication and Camden started the herbal medication as well. I immediately felt better, with my fatigue and migraines nearly disappearing overnight, and Camden’s behavior began to improve tremendously as well. His Oppositional Defiant Disorder behaviors went away and hyperactivity was diminished, if not taken down to a “normal boy” level.

After a while, though, I felt like I was struggling with fatigue some again, and I experienced a migraine. Camden’s behavior also regressed some as well. So, after reading this guide by Diane Sanfilipo, I asked our doctor about a prescription called Rifaxamin for Camden. It seemed like a perfect solution. However, we found that our insurance would not cover it, and one month of treatment would be $1200! It was back to the drawing board.

Where Are We Now?

We are currently looking into a stronger herbal treatment our doctor has recommended, which would include two additional medications, including this monolaurin-based supplement and this supplement formulated to target gut dysbiosis. I am considering taking another round of antibiotics (!), though the herbs might be enough. Even though it has only been a few months, I can’t help but want to see better results NOW! Because we had such outstanding results for a solid month early on, I want and expect to be able to accomplish that again. This is certainly a lesson in patience. But the fact is, I know it’s possible!

In the meantime, I’m following my friend Candace’s advice and celebrating the small victories: I’m thankful that when Camden does have ODD behavior, it only lasts 15-30 minutes, instead of all day or weekend like it used to. I’m thankful I’ve only had one migraine in several months’ time, instead of 2-6 times per month like I used to. And when we have a really bad day, I use it as a reminder of how far we’ve come! And I remember that He who began a good work in us will be faithful to complete it! Ultimately, I think we just need to give everything more time.

I would be remiss if I didn’t tell you how we’re healing spiritually as well. When we started the healing of our bodies a few months ago, there was a lot of anger in our home. After some prayer and spiritual deliverance, I received freedom from the oppression of anger, and as a result, we began to be free from anger in our home as well. This has been a huge part of Camden’s healing from Oppositional Defiant Disorder. Now, when we begin to struggle physically or behaviorally, I realize my focus has shifted and I am not choosing to walk in the freedom I’ve been given.

So, I stop and I ask the Holy Sprit to fill our home and give us a spirit of peace. I repent for choosing to walk in anger, and I tell the spirit of anger to LEAVE! And I take authority and rebuke Satan and claim freedom in our home. Each time I have done this, our health, physically and behaviorally, instantly improves. When I choose not to participate with anger, fatigue, grouchiness, and sickness, those things have no power over me and they cannot stay. Does that mean I won’t have to do it again? Probably not. But it does help us to regain that freedom once again, and remind the enemy Who is the boss in our home! You can read more about gaining spiritual freedom yourself here.

We are praying about and discussing further with our doctor the increase in herbal treatment. We are also preparing for the GAPS intro diet, which was created to heal the gut and promote good bacterial growth. We plan to start in September, so I’m currently stocking our freezer with broth and will make a big batch of fresh sauerkraut soon! I’ll keep you updated as we continue to prepare and begin.

Brendan’s Story: Deliverance from Autism
Our Favorite Supplement to Treat ADHD and Other Behavioral Problems