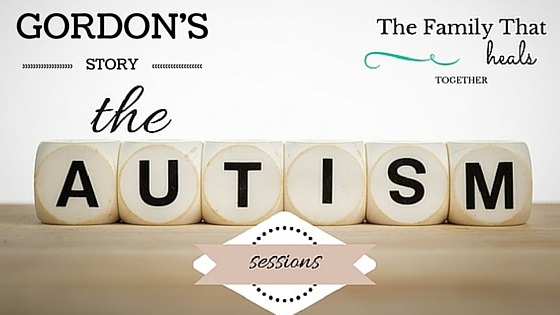 My friend Tracee has told me about how her son, Gordon, used to have autism, but he doesn’t anymore. She’s told me about the hard work it took to heal him from autism, but listening to this confident, committed momma relay the entire story is something else altogether. Tracee delved into the world of whole-food health to heal her toddler about eight years ago, and today, Gordon is happy and healthy, and Tracee has learned a lot about healing her own body along with way.

A Trail of Incidences… That All Led to Autism 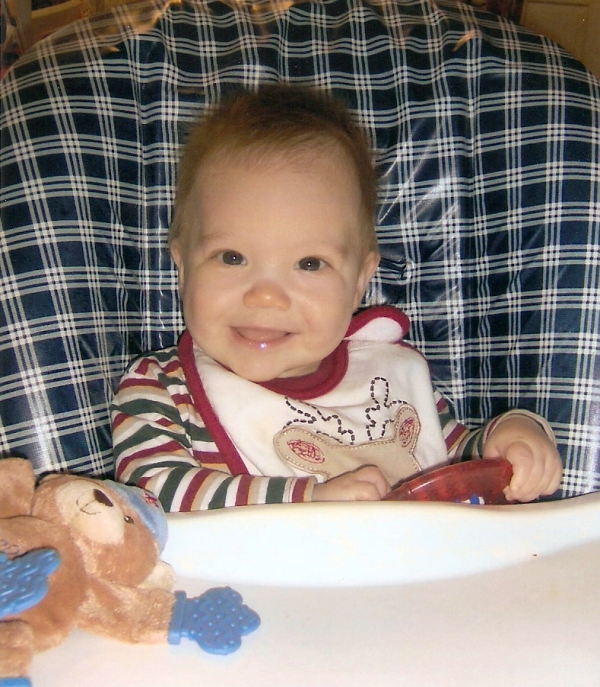 Gordon as a baby, before the multiple rounds of antibiotics. He was happy and hit all his milestones on time.

Gordon was about 18 months old when things really started going downhill. He was born healthy, alert and breastfeeding well, but at two days old became jaundiced. He began to have trouble breastfeeding and started having severe reflux and colic. Tracee says the pediatrician told her that her milk was “bad,” but now she wishes she would’ve known how to change her diet and stick it out. Gordon would suffer from 12-16 hours a day of colic. When they started using a special formula, it seemed to help. Around a year old, Gordon was social and would “work a room.”

However, when Gordon was about 18 months old, he had an ear infection, for which he was prescribed antibiotics. This, Tracee says, was the turning point for Gordon. The antibiotics gave him diarrhea and he stopped sleeping through the night. Over the course of a year he had the flu and strep several times. He was on antibiotics all the time. By the end of the year, he had lost eye contact, speech, and interaction with his family for the most part. He did, however, love books and would come over and make sounds if he saw someone with a book.

It was at this time that Gordon had begun throwing tantrums, which Tracee says were so bad, they could not go out in public. “He had constant tantrums and quit eating. He would go for weeks at a time without eating anything substantial,” she says. But Tracee would soon learn there was something very seriously wrong. “I knew he would need speech therapy so I got a book about what to expect from therapy. One of the things it said was if your child has lost speech or is staring at lights- run, don’t walk, to get tested for autism.” 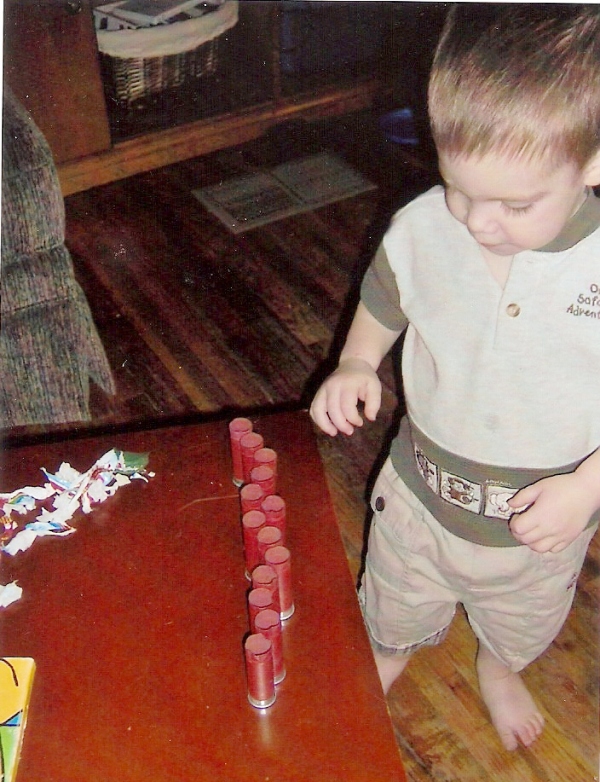 Gordon, after beginning omega 3 supplementation. He was calmer and the tantrums had eased, but the autism was still there. You can see him lining objects up in this picture, a common sign of autism.

In that same book, there was a chapter on the importance of omega fats, which described the work of a doctor named Gordon Bell, who found that autistic kids were lacking in omega 3s, and that some kids regained their speech after fish oil supplementation, so Tracee started using them for Gordon. (Note: I suggest getting omega fats in using cod liver or other high-quality fish oil, which is well-absorbed in the body and brain. We use this brand.)

Gordon’s dry skin and cradle cap cleared up after starting fish oil. Soon, he started to make eye contact with grown ups (though he still wasn’t interacting with his peers). His babbling increased and started to sound more normal and he picked up new skills like sucking through a straw. Around this time, Tracee miscarried twins… just as Gordon got his hugging skills back. Tracee says it was a comfort to be able to experience physical affection from Gordon again.

The omega 3 had eased tantrums and Gordon had begun sleeping 5-6 hours a night. Next, Tracee removed Red40 from his diet and the tantrums completely stopped, and after a couple days he was sleeping through the night. He was also going through speech therapy and learning to sign some words, but it was moving painfully slow. After a month or two he had only about three words down.

Tracee read Jenny McCarthy’s book on a gluten free, casein free diet, and it began to make sense. Gordon had always had gastrointestinal issues, and would pass very large stools. So, Tracee, says, she read in the medical journals about what kind of issues gluten and casein could cause. “I wasn’t looking for a miracle,” she says, but the puzzle pieces were starting to fit together.

“I’d had autoimmune problems my whole life and began to think maybe I had gluten problems. I had been reading about food allergies and began to read about allergens that might be in shots,” Tracee says, “Gordon had had a bad case of conjunctivitis when he was one week old. It was cultured and it came back negative for bacteria and viruses. Later, I learned one of the newborn shots had bakers yeast, which is a common allergen for those with Chrons and celiac. I think that’s what caused the infection. When I stopped eating gluten and bakers yeast, I felt better. Anytime I ate something with bakers yeast, I would immediately start braking out in canker sores.” Removing bakers yeast made no difference for Gordon, however.

The Answer She Was Looking For

Tracee says, “Around that time, I ran across something about the SCD [specific carbohydrate diet]. It caught my interest but it took some preparation. Thankfully, I had some cooking skills. In the meantime, I pulled sugar and added kefir to our diet. I had horrible die off symptoms. I should’ve put two weeks between the two because it was too much.”

Tracee describes something called posturing: “Gordon would lay with his belly against the couch.” (This is thought to be done by autistic children because their bellies hurt and it may help to relieve gastrointestinal pain and pressure.) After starting SCD, “Gordon was happy, but when I would change his diaper there would be truckloads of nasty stuff coming out of him!” she says. She describes a smiling, happy face on one end… and something else entirely coming out the other!

By three weeks into SCD, Gordon had about 5 new words he said in one day! Before, he had lost climbing skills and the ability to ride on toys, but after starting SCD, he began riding around, climbing and noticing other kids. He had what Tracee calls “permagrin” for about two weeks- he was so much happier and more pleasant.

Before this, the rehab center wanted to start seeing Gordon twice a week. When the nutritionist saw the improvement from changing his diet, she suggested IGG food allergy testing. The test showed he was becoming allergic to everything he ate, so Tracee learned how to rotate his foods, so he could only have each type of food once every four days. Thankfully, Tracee says, working with a nutritionist while they were doing SCD with such a limited diet was incredibly helpful. She notes that she made lots of juices out of vegetables and fruits with an added teaspoon of different oils to add calories.

Gordon about two months into SCD. Tracee says it was the best Mother’s Day ever, because Gordon had come back to her! 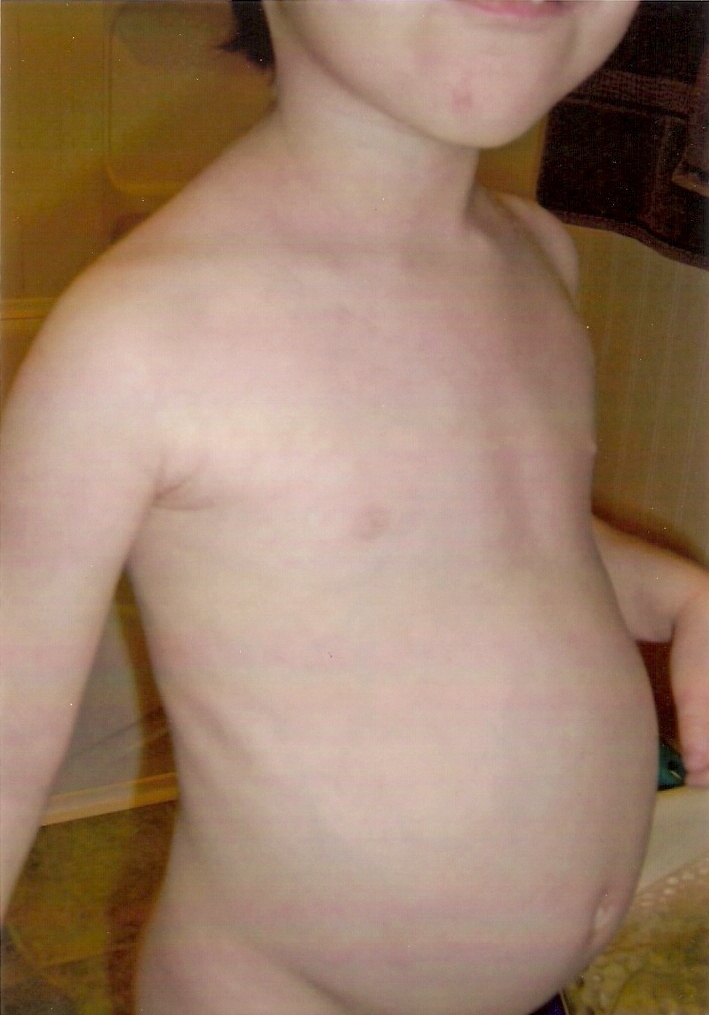 A shot of Gordon’s “yeast belly,” a hallmark of children with autism and gastrointestinal disorders. Tracee says this symptom took a while to resolve.

A couple weeks later, as Gordon was nearing age three, he was evaluated through the school district. Tracee says, “they said ‘No. Nope. No. There’s no autism here.’ But we were still worried about catching him up because he had just missed out on 18 months of development. We were then able to see a developmental pediatrician.” The developmental pediatrician has helped them to continue healing Gordon as they walk through remaining symptoms.

Gordon, now ten years old, is a typical kid. “We went from a child with full-blown autism. I had lost my child. Now he has best friends. He has a few issues that still allow for a high-functioning, mild diagnosis,” Tracee says [which they prefer to keep so that he can receive needed services].

She is encouraged because even conventional medical doctors are learning about SCD. “There is now positive research about SCD. Even our conventional gastrologist is familiar with it,” she says. But she also emphasizes making small changes as you’re able, noting what an improvement they saw just from adding the omega 3s when Gordon was 2 ½. From seeing the improvement at each step, Tracee learned “Every little degree of improvement you get makes life easier.” 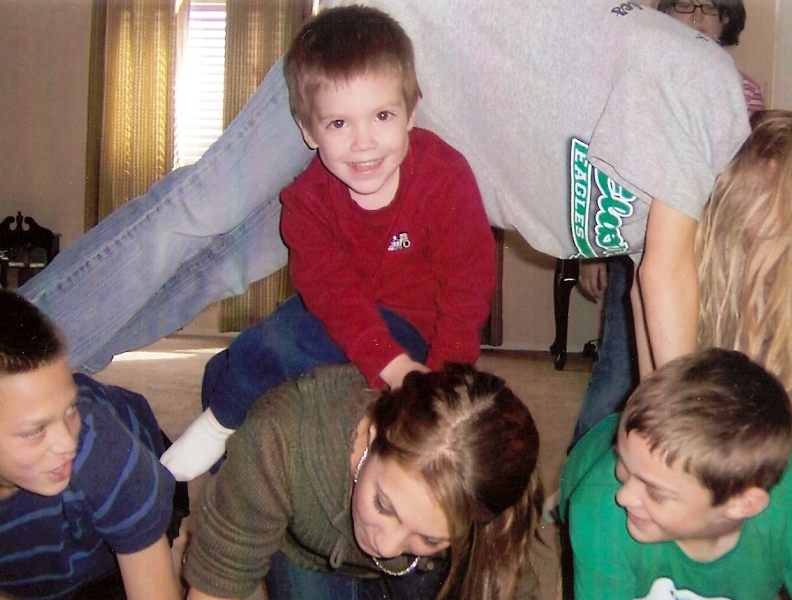 Gordon at age 4 1/2, about two years after beginning SCD: happy, interactive, and playing with other children! 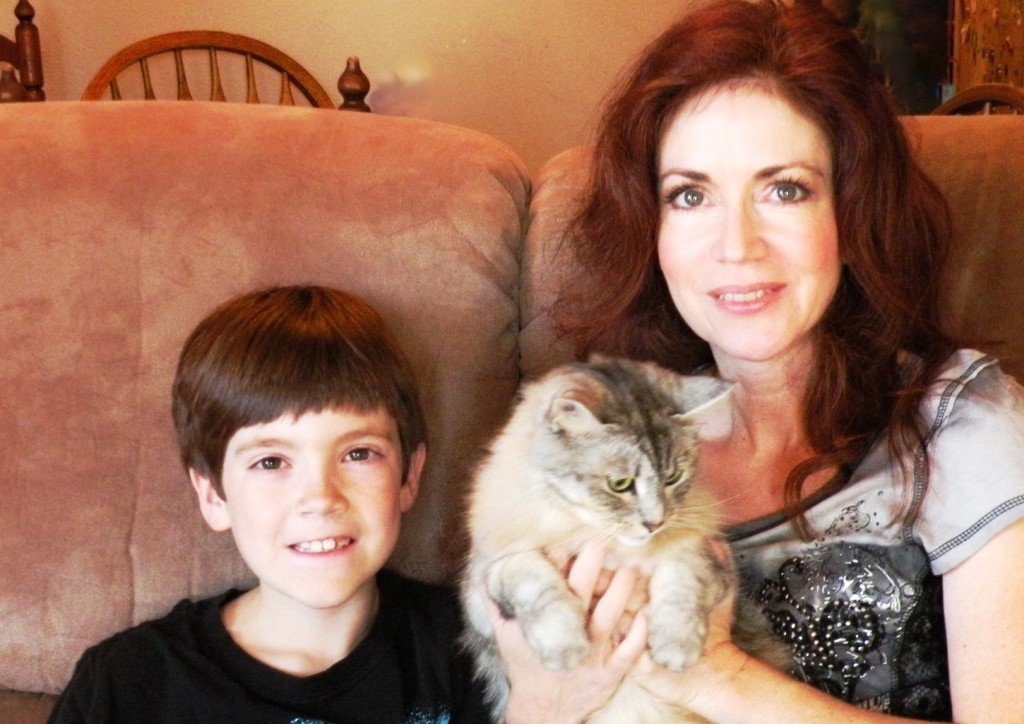 My beautiful friend, Tracee, and her happy, healthy Gordon, in a recent picture.

Tracee’s powerful story is such a testament to how much healing can be achieved by food alone, and that through steady changes, even over a period of time, healing can come!