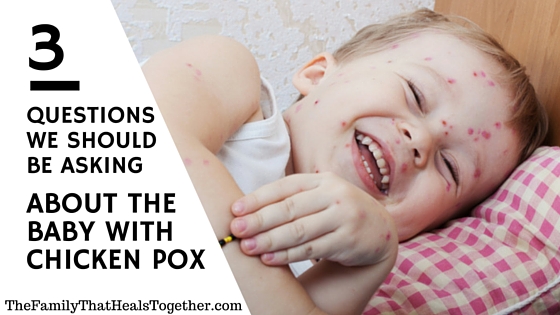 You may have seen a post floating around Facebook showing a baby with chicken pox [aka varicella]. His mother, Kayley Burke, calls any parent who chooses not to vaccinate a “bloody idiot.” She says “vaccinate your kids people,” citing her son’s horrible secondary infection as the reason parents should vaccinate against chicken pox, because babies like her son are not able to be vaccinated and depend on the immunization of older children to protect them.

You know I’m not one for shaming other parents or calling them out for making the best choices they can for their children. We all just want to do right by our kids.

But, because the original post has gone viral and so many news outlets have picked it up and are using it as a way of championing an unnecessary vaccination, and parents who choose not to administer it to their children are being shamed and bullied, I think we should look a little deeper and think critically about this story, because there are a few questions we should be asking.

The truth is, we don’t have all the facts, so to jump to conclusions that this child’s illness is the fault of “anti-vaxxers” would be premature.

3 questions we should be asking about the baby with chicken pox:

Was the baby breastfed?

Don’t mistake this question for judgment of Kayley Burke. Instead, let’s look at some of the benefits of breastfeeding.

Breastfeeding facilitates mother/baby bonding, decreases incidence of asthma and allergies later in life for baby, and passes on antibodies from mama to baby.

Breastfeeding passes on antibodies from mama to baby, which means, when mama is exposed to normal childhood illnesses, such as chickenpox, her breastmilk will later contain antibodies to those illnesses, which her baby will inherit through the natural process of drinking her milk.

Antibodies are proteins that develop when the body is exposed to an antigen, so that if that antigen attacks again at a later time, the body is able to fight it off. That’s why allowing children to contract these minor childhood illnesses is beneficial to the child, and why through natural exposure, children develop a lifelong immunity, versus the temporary immunity offered by vaccinations. This is why booster shots are recommended, because any immunity developed following vaccinations is temporary.

When babies are older, no longer protected by breastmilk, and their immune systems are developed, they are able to contract these common childhood illnesses and later, pass the antibodies on to their children.

Was the baby’s sister recently vaccinated for chicken pox?

In her post, Burke says “Kaliah [the older sister] hasn’t long been immunised…” I can’t help but wonder if this means she was recently vaccinated against chicken pox. Did you know that the chicken pox vaccine uses a live virus?

According to the CDC, “People who get chickenpox vaccines can spread the vaccine-strain varicella-zoster-virus to others.” (source) I recently read this can happen for 45 days following vaccination. And even if little Kaliah wasn’t vaccinated so recently, does Burke know her child did not come into contact with another recently vaccinated child?

The fact is, we don’t know for certain where the baby contracted the chicken pox from, and it’s completely irresponsible to blame unvaccinated children each time someone gets sick.

A study done on astronauts found that some tested positive for the varicella zoster virus, despite the absence of chicken pox lesions. The study, “Asymptomatic Reactivation and Shed of Infectious Varicella Zoster Virus in Astronauts” proved that the virus can be shed, even in the absence of symptoms. (source)

I also wonder if Kayley Burke had chicken pox as a child, and whether she was up to date on her boosters.

Did Ibuprofen use lead to the secondary infection?

Finally, we should examine whether the mother’s use of the drug Ibuprofen on her child may have led to the secondary infection.

The mother has since removed her comment from her original post, but in the comment, she states “…to be honest I am over being asked that question and then people questioning my parenting…” 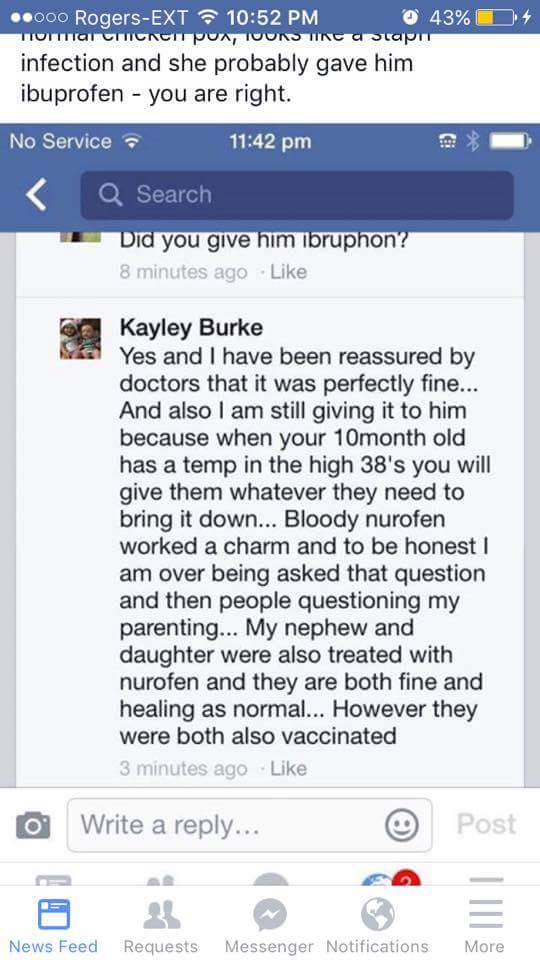 Clearly, other parents are on to the fact that ibuprofen can have this side effect, so have asked Burke if she was using it. She admitted to using it, but balked at those “questioning” her parenting… I can’t help but point out the fact that her statement that parents who choose not to vaccinate are “bloody idiot[s]” is not only questioning other’s parenting choices, but judging them for the choices they make.

Using anti-inflammatory drugs to lower children’s fevers during illness effectively knocks out their body’s defense mechanism. Fevers are intended to kill bacteria and viruses. If we lower the body’s temperature, the virus can reproduce and thrive, unchecked. Could this be the reason the chicken pox virus turned into a secondary skin infection?

(Worried about your child’s fever? Read about how to treat fevers in babies naturally.)

I’m not sure how high this baby’s fever was, but Burke states it was in the “38s,” which, when changed to Fahrenheit, might only be around 100º. I definitely don’t worry if my kids have a fever in this range, as this is exactly the temperature the body needs to be at to fight off infection.

Parenting is about individual responsibility

I understand Burke and her children have been through a frustrating and scary ordeal. I would be frightened if my child came down with such a severe case of chicken pox.

We have got to stop insisting other parents make the choices we deem best for their children. Doctors and pharmaceutical manufacturers developing outrageous vaccination schedules that include inoculations for common childhood illnesses once thought of as a (mostly harmless) rite of passage, should not be determining what’s best for individual children whom they’ve never met.

And posts like the one in question, which call out parents who choose not to vaccinate, should not serve as gospel truth to convince the masses that everyone should vaccinate their children for everything, and if we don’t, we’re putting everyone at risk.

There are too many variables and too many unanswered questions, the answers to which may contradict everything we’ve been taught about how vaccinations work and why our children should get them without question.

Do you agree that we don’t have enough information about this baby with chicken pox? 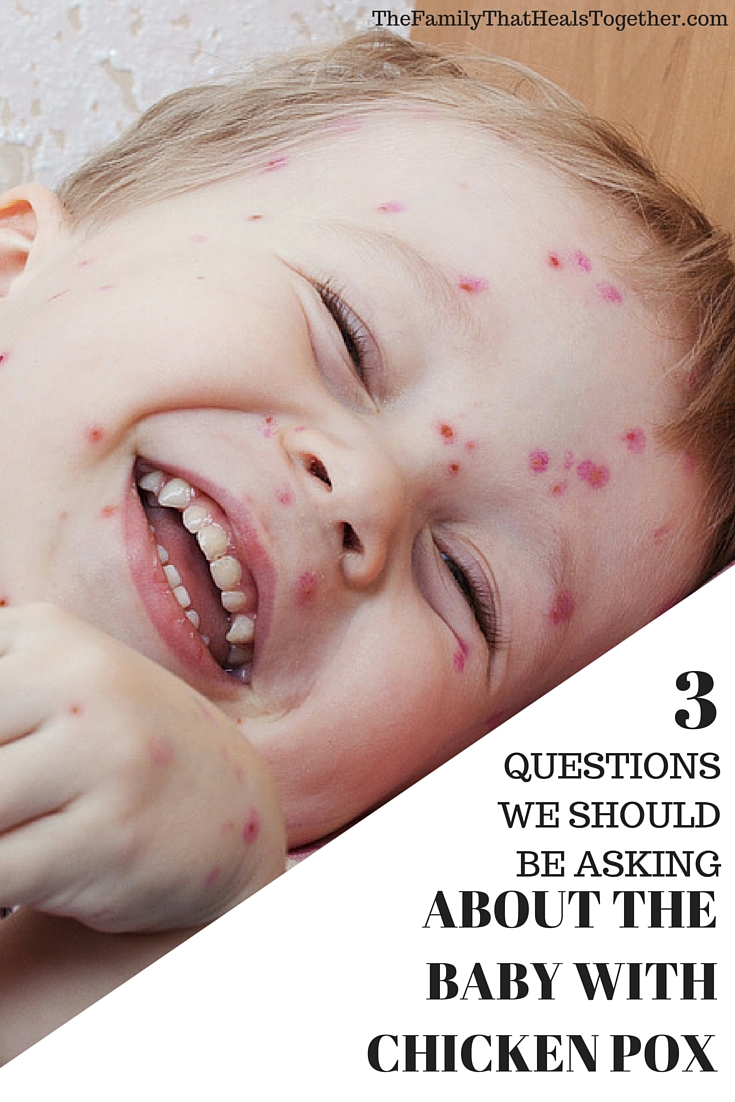