It’s probably no surprise to you that fluoride is toxic. But did you know we are exposed to fluoride in countless ways and that fluoride may be responsible for any number of health problems? Below, contributor Danielle tells us all about fluoride dangers and how to avoid them. 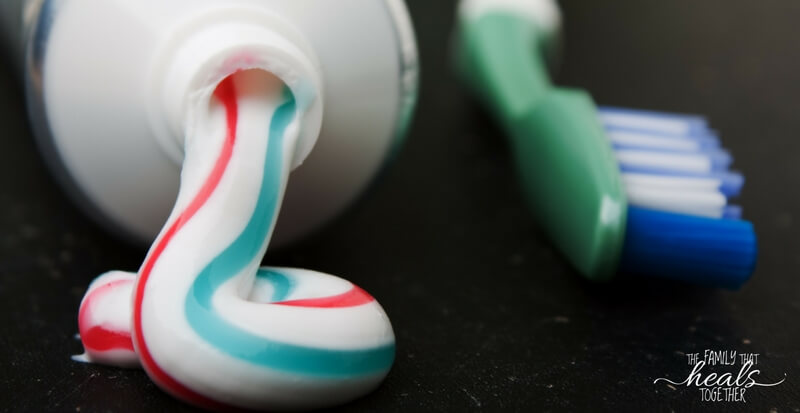 Fluoride is an element of fluorine combined with another element, such as a salt, to create fluoride. Fluorine is one of the most reactive and electronegative elements.

Sodium fluoride has since been found to cause cancer and so was removed from the water supply, although it is still used in toothpaste and pesticides, thus making its way into your food supply. Fluorosilicic acid is now used in the water supply, yet is still a very toxic chemical. It is a waste product of the fertilizer industry and has been implicated in a number of health issues.

The use of fluoride began in the early 1800s when inhabitants of the day sought to correct brown stains on Colorado Native American’s teeth. It was investigated from 1933-1945 for its ability to prevent cavities and has been used since that time. By 1951 the practice began to quickly spread throughout the U.S.

Now, nearly every conventional toothpaste contains fluoride, and every trip to the dentist includes a fluoride treatment (related: how to tell if your dentist is truly holistic). But is it safe?

Is fluoride toxic to humans?

That depends on who you ask. Though the U.S. adds a synthetic form of fluoride to the water supply, there is ample evidence that fluoride is toxic to the human body.

Death may result in an adult from ingesting 2mg of fluoride or more. (source) Not only can it cause death in humans, it’s one of the main ingredients in rodenticide and insecticide, so it can easily kill small animals as well.

What are the effects of fluoride on humans?

Fluoride has been linked to decreased testosterone in men, leading to sterility and fertility issues. (source)

What does fluoride do to the body?

Consider that around 40% of the American youth have fluorosis, a condition where too much fluoride wears away the tooth’s enamel. This causes hypermineralization of the teeth, and damage and discoloring of the teeth is possible. (source)

Fluoride has been heavily linked to acne and other skin issues, including melasma, which is a discoloring of the skin. Read here about a woman who healed her chronic cystic acne by reducing her fluoride exposure. (source)

Early signs of fluoride toxicity include:

For a child, toxicity is possible at levels of .1 to .3 mg of fluoride, which is found in just 3% of a tube of toothpaste. That amount can be easily swallowed, which has led the FDA to require a poison warning on every tube of fluoride toothpaste. (source)

Since low toxicity symptoms are unrecognizable compared to a simple virus or flu, there’s no telling how many true cases of fluoride toxicity are actually happening in the U.S. today. However, in 2009, there were over 24,500 calls to Poison Control Centers because of consuming too much fluoride toothpaste. (source) The real number is likely much higher.

And the dangers of fluoride can be much further reaching. Fluoride depletes antioxidants such as the all-important glutathione, which helps the body detoxify toxins.

So where is fluoride lurking? Fluoride is found in more products than most realize. Keep in mind that fluoride supplementation has never been approved by the FDA in any form.

Water. For decades, the U.S. government has mandated fluoridation of the water supply, although most other developed countries reject the idea. Fluoride is the only mass medication program that the government is pumping into us without our consent (I could argue there isn’t informed consent for vaccines, but I digress).

You can check how much fluoride is in your water supply with a simple test, or by calling your municipal water company. You should also receive a yearly report of the condition of your water.

Toothpaste. Over 80% of toothpastes on the market contain fluoride. This is especially harmful to young children who may easily swallow toothpaste.

Food. Fluoride in food? You bet, thanks to over 150 pesticides that contain fluoridated chemicals. (source) One such pesticide is cryolite, which is heavily sprayed on brown and white rice, cocoa powder, almonds and other tree nuts, and dried fruits, although it can be found on a number of non-organic fruits. (source)

Cookware. You can increase the amount of fluoride in your food if you cook it in Teflon-coated cookware, up to three times as much! (source)

How to avoid fluoride dangers

Use a water filtration system for your drinking water, such as a Berkey filter (note- you have to be sure to buy a Berkey WITH the added fluoride filters!).

Reverse Osmosis is also a good solution, but you’ll want to be sure you choose a unit that adds minerals back into the water. Jaclyn’s note: this is the one our family uses.

You may also purchase bottled water; however, bottled water may not be free of fluoride, so opt for fluoride-free brands, such as Fiji or Volvic. If you buy large water bottles for drinking, check with your water company to be sure the water does not contain any added fluoride. (Jaclyn’s note: I don’t recommend utilizing bottled water too often because it’s been recently discovered that plastic particles leach into water.)

Buy a whole-house water filtration system to avoid absorbing fluoride through your skin. While it’s important to be sure you’re drinking filtered water, it’s equally important to be sure the water you bathe in is filtered as well, since our skin is our largest organ, and a rather absorbent one at that. Again, you have to be sure to buy a filter specially designed to filter out fluoride.

Be sure to purchase “fluoride-free” toothpaste. We like this one or this one.

Fluoride dangers are no joke, but you can avoid them by making some thoughtful changes in your home.

Regardless of what the mainstream media and Crest say, fluoride is toxic and measures should be taken to avoid it. Be sure to limit the fluoride in your city water supply with a filter or alternative water supply, purchasing fluoride-free toothpaste, purchasing organic foods, and choosing the right cookware to keep your family healthy and away from this toxic chemical.