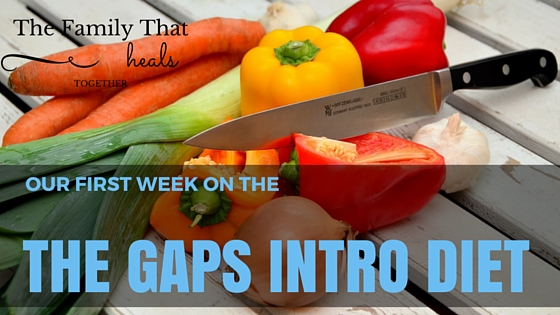 The GAPS Intro diet can be rather difficult and intense. However, I’ve found that with a little creativity and a few tips and tricks, our first week has gone by without a hitch! We did this diet a few years ago and it was a total nightmare. We were sick, lethargic and just plain miserable. This time has been a completely different story. Let me tell you why…

First, I’ll explain why we are doing the GAPS diet, as well as what it is. The GAPS diet (Gut and Psychology Syndrome) was developed by Dr. Natasha Campbell-McBride to heal her own child from autism. She based it on the Specific Carbohydrate Diet with some changes. For us, it’s just a stricter version of the diet we have already adhered to for the last few years. Like a paleo diet, the GAPS diet is free from grains. Like a primal diet, it allows high-quality dairy, namely those that have been cultured for 24 hours, like homemade yogurt, kefir and sour cream. Unlike these diets, however, GAPS is very strict about allowing starches and sugars. The only sugars allowed on the diet are fruits and honey. Starches like arrowroot and my beloved cassava flour, as well as potatoes of all kinds are out.

Eliminating sweet potatoes has probably been the biggest bummer for me, because I really love them. I was worried most of all that my blood sugar would plummet like it did on the 21 Day Sugar Detox, which caused me to do a modified version to allow sweet potatoes since I was breastfeeding.  Surprisingly, that hasn’t happened all week, I think due to the large amounts of meat stock I’ve been drinking, as well as high quality fats and protein that have been a constant staple, and making sure I keep my carb intake up with tons of veggies, namely squashes, carrots and peas.

We have chosen to do GAPS to heal some food sensitivities as well as lingering behavioral issues for our kiddos. Our oldest struggles with hyperactivity and poor self-control, while our other kids have little issues from time to time that we think will be helped by a little gut healing. I personally have lots of food sensitivities that I’m working on healing, as well as some chronic infectious issues that are already showing improvement. Though eating a primal diet has primarily healed the worst of my symptoms, I still have some lingering problems that I’m working on now.

I’ve been so thrilled to get creative this week in the kitchen. The first time we did intro, I mistakenly thought we were much more limited than we actually have to be. Now, I realize we can eat most vegetables, which has opened up lots of possibilities. I’ve made spaghetti squash and “zoodles” (zucchini squash cut into thin strips) cooked in broth and topped with meatballs or shredded chicken with either a broth-y tomato soup or my “caulifredo” sauce on top. Speaking of which, I’ve found that putting cauliflower sauce on just about anything improves the flavor and adds some extra nutrition. And meatballs really saved dinner the first few nights. Kids will almost always be happy with meatballs, even if they’re swimming in broth with a bunch of veggies buddies. Check out my meatball recipe that you can have from stage one here!

The very first day, my blood sugar did start to get a little low, so I quickly whipped up some gummy snacks with a little raw honey and prevented a blood sugar crash. The second day, I had a nasty headache that was quickly turning into a migraine. Again, I made the gummy snacks and the headache vanished! Since then, I’ve also made some coconut melts and salted caramel bites, each of which got in some needed fats while keeping blood sugar levels stable. It doesn’t hurt that they’re also delicious- and the kids absolutely love them! You can find my coconut melt recipe here.

Aside from that, I’ve made a few blended soups like butternut squash, which I enjoy, but my kids hate. I found tonight that by cooking carrots with the squash, then adding a little shredded chicken to each bowl totally changed my kids’ outlook on the soup, plus, if you can have orange veggies, it’s a great way to get in some carbs. After cooking the butternut and carrots (along with a little onion), I threw it all in the Vitamix and blended with a little raw garlic and ginger. It has a nice, spicy finish that I loved!

My greatest help and resource has been the Heal Your Gut cookbook. It is full of tips, tricks and tutorials that have made this first week that much smoother. The recipes have given me tons of inspiration, even if I really haven’t followed them to a T. It has really opened my eyes to how much delicious food you can still eat when on such a limited diet.

The foundation for GAPS intro is meat stock, made into soups and stews. I have found the easiest way to make this is by poaching a whole chicken or putting 2-3 packages of chickens legs and/or thighs into a large stockpot filled with water and simmering for a couple hours. This way, we will eat the chicken straight away in the stock with some vegetables (I often throw some chopped veggies, sometimes from the freezer, into the pot for the last 20ish minutes) for an easy meal, then have a whole pot of meat stock left over for more soups and for drinking from a mug, and sometimes we have chicken left to put into other meals as well. I’ve also done this with a package of oxtail as well as steak.

At the end of the day, whatever is left in my stock pot/s, I combine and put in the fridge, then the next morning I have something I can quickly warm up. This way, I keep a perpetual pot of soup going and add more to it as I go. We have not thrown out any soups, but have just kept using them until they’re gone. It has saved a lot of work for me to keep reusing these foods. I have only had to defrost and use a couple bags of stock I had previously frozen because this method has provided plenty. Plus, this way, we’re keeping a steady stream of LOTS of vegetables coming in, because every time someone’s hungry, I just chop more veggies and throw in the pot. We aren’t eating meat at every meal, yet we’re still satisfied.

The biggest difference this time around is that we are better supporting our detox. I’m making sure each kid gets a detox bath most days, and I’m trying to get them in often for myself. We drink water with fresh lemon juice lots of mornings as well. For me, a big difference is coffee enemas, which I’m utilizing right now to keep my system flushed of everything that’s dying off. The first time around, no one used the bathroom for the first week, whereas most of us have used the bathroom every day, I think partly because of the coconut melts (also known as constipation candies!). I’m also being diligent with giving our sauerkraut juice at every meal, and we’ve now moved on to a tiny bite of sauerkraut before we eat.

We are going slowly with kefir and have stopped most of the supplements we were on, though if there’s something I feel strongly we need on a given day, we’ll take it. Two of my kids did go a day without using the bathroom, so I gave them a little Natural Calm. It is not GAPS-legal, but it was worth it to me to get their bowels moving.

As we gear up to start week two tomorrow, we are going to stay at stage two for a couple more days. We’ve dealt with some loose-er stools than normal, and I’m a little nervous to start introducing nuts, so we’re just taking it nice and slow. By the grace of God, I’m not desperate to move on before we’re quite ready. I am content and peaceful to move as slowly as we need to, though I think we’ll move quickly enough just fine. We should be at least to stage 5 by Thanksgiving, which will allow us to enjoy a nice meal. 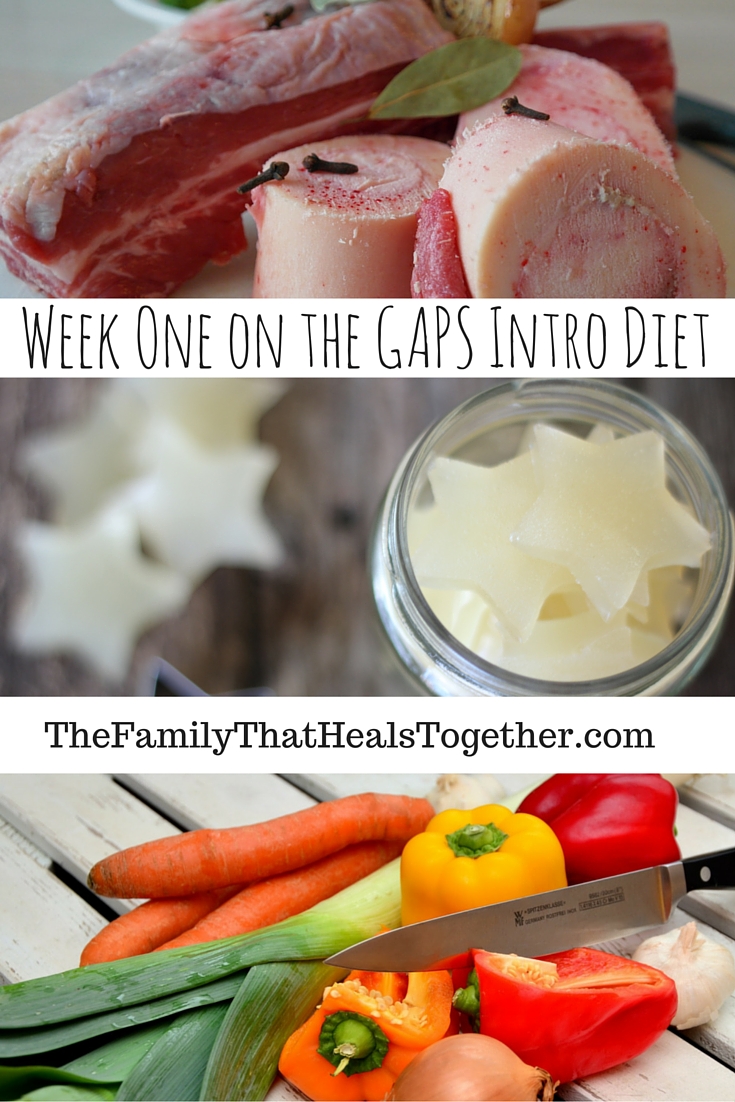