You have no self control.

You’ll always be addicted to sugar.

They’re going to resent you.

You’re too strict about what they eat.

You’re not strict enough about what they eat.

On guilt… and grace… and doughnuts

See, when you’re told that your son needs medication at the tender age of three because he can’t control himself, not for one little second, you begin to doubt yourself. It’s not him; it’s you. It’s your parenting.

And when you can’t bring yourself to put that tender little boy on mind-altering medications, you dig in deep and you decide right then and there that you’re going to fix it. Because you’re a fixer, because you’re a mom and that’s what moms do. They fix.

And then you take the weight of the world on your shoulders as you fix your little boy.

And you fix him. Really fix him, from the inside out. And you soar… and you dredge through the valleys and you learn it’s all worth it.

I did that. I took the weight of the world on my shoulders and it worked and it was messy and rewarding and wonderful and hard.

And I hid in my closet and cried and ate my secret chocolate and gluten free cookies and resolved to do better. (And envied moms whose children had a semblance of self control even though they ate red dye.)

Years of shouldering the world became an obsessive and incessant need to control everything: every bite that passed my or my children’s lips. It led me to tsk tsk my husband’s occasional indulgences and look down my nose at fellow grocery shoppers loaded up with all the things I used to eat but never do and recoil in horror at friends’ pictures of their children eating food dye and white flour.

So He told me to give it to Him. And it hurt… this thing I had held on to and shouldered for so long had to be free so I could be free. Because what I didn’t know is that I had been free all along.

So I had to fight for the freedom I was already given and His grace gave it to me and it was glorious, if fleeting because I’m a stubborn woman and tend to pick things back up that I’ve already put down. But I’m learning. 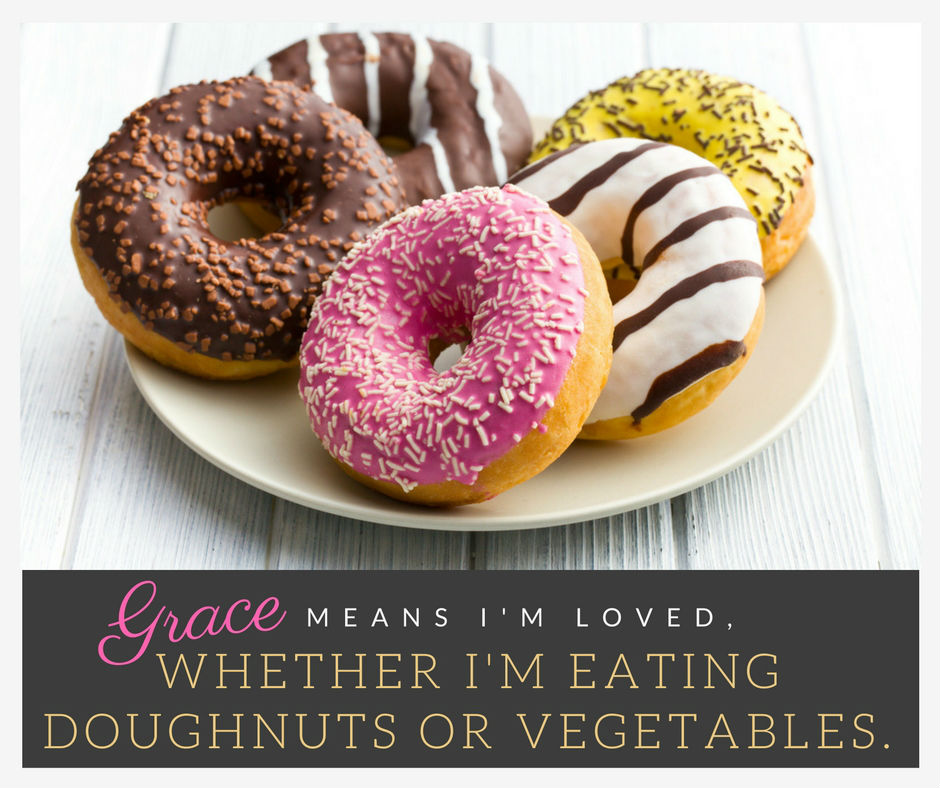 One day while walking through the grocery store, headed for the doughnuts because you have to pass the dreaded bakery section to get to the health food section, I heard a Holy Spirit whisper: “Let them get doughnuts.” The scary and exhilarating thought raced through me, and I knew in an instant I would let them have doughnuts, and even though they never ask because the answer would never be yes, one of my little men asked. He did the unthinkable and asked for a doughnut.

And then they nearly fell over when I said yes. And as I began to say “But only the glazed ones!” I heard another Holy Spirit whisper: “Do you trust me?”

So I let them get the really bad doughnuts in all the brightest colors and it was fine and they were delicious (because mama doesn’t gift her children with doughnuts and not have one herself!) and no one was worse for the wear, honest. No food dye meltdowns. No gluten-y gluten tummy aches. Because grace wins and Jesus said yes.

He said yes to me on the cross so I don’t have to live shackled today.

The truth is, I’m still walking through the muck of figuring this food and grace thing out. It’s been six months of ugly, faith-testing growth, watching hard work seemingly go down the drain as old symptoms began to crop back up.

Never before have I questioned my faith as much as I have over the past six months. Because of food, y’all. But truthfully, you can’t grow if you’re not working through the hard stuff. And for me, food is hard stuff. Because food has so much power over how I feel and how my child behaves.

But maybe I’ve given food too much power.

Of course it is. We can’t change biology just because grace and freedom exist. There are still foods our bodies were meant to eat and food-like products no one should ever consume because our bodies really don’t know what to do with them.

But every once in a while? Grace says go for it. Grace says the gluten free pizza is good enough on the days I’m too tired to whip up a  decent meal. Because sometimes good enough is just that… good enough.

Funny I’m writing this days before we’re slated to begin the GAPS intro diet again, because if I’m being honest, GAPS is the epitome of strict eating. And I really don’t have this all figured out just yet and I’m not sure I’m really, totally free from my controlling ways. The kids will hate it and I’ll have to bribe, beg, and force every cup of broth.

Yet…? There’s peace in knowing we’ll be nourished and our bodies will reach another level of healing. Because we were made for more. And we’re offered the gift of being whole; that’s what He gave us on the cross. If eating soup for a few weeks helps us receive wholeness that much more, I can eat soup.

But it’s not because I have to, or because He’ll love me more if I do. It’s because it’s for my good. He loves me whether I’m eating doughnuts or vegetables (and no matter my pants size), whether I lovingly cuddle up with my kids and read them a story or fly off the handle and lash out at them like a crazy person (because I do).

His grace means I’m loved, whether I’m at my best or my worst. And while I’m still in the muck, I’m going to snuggle up with that grace and roll around in it a while. With one last doughnut before the soup starts. 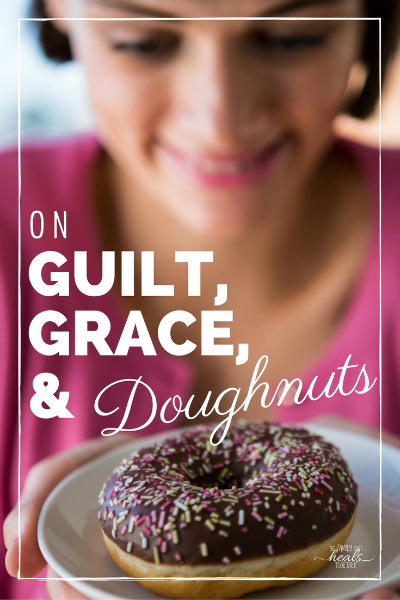