Even the staunchest vaccine proponents must admit: vaccines are not a one-size-fits-all procedure, and some people will suffer adverse reactions. Below are some common vaccine contraindications that may surprise you.

With recent vaccine debates ramping up due to increased legislation and reported outbreaks, there seem to be a lot of folks who think everyone should be vaccinated, and those who choose not to vaccinate should be penalized.

Just like a particular surgery or prescription medication won’t work well for everyone, vaccinations are not a good choice for everyone.

Some people, in particular, are much more likely to have adverse reactions to vaccinations, including:

1. Those with an autoimmune disease

When one has an autoimmune disease, it means their immune system has begun attacking their own bodily tissues. Examples of this are arthritis, thyroid disease, fibromyalgia, lupus, and multiple sclerosis. Did you know that common childhood conditions like allergies, eczema, asthma, and digestive disorders are also signs of autoimmune disease or immune system dysfunction?

Vaccinations are designed to elicit an immune response. When the immune system is already malfunctioning, it does not respond as intended to vaccinations. Instead, it may become further confused.

For adults with an autoimmune disease, this could mean a worsening of symptoms or new systems. For children with existing autoimmune symptoms, this assault on the immune system could be the straw that broke the camel’s back and lead to worsening or new autoimmune conditions like type one diabetes, or even autism.

According to Dr. Natasha Campbell-McBride, author of Gut and Psychology Syndrome,

A compromised immune system is not going to react to environmental insults in the normal way! Vaccination is a huge insult to the system. The manufacturers of vaccines produce them for children with normal immune systems which will react to these vaccines in a predictable way.

However, in our modern society with our modern way of life, we are rapidly moving to a situation where a growing proportion of children do not have a normal immune system and will not produce an expected reaction to the vaccine.

2. Children born to a mother with an autoimmune disease

In the same respect, children of mothers with an autoimmune disease are more likely to already have a malfunctioning immune system. Children born to mothers with fibromyalgia, digestive disorders, severe allergies, eczema, asthma, or neurological disorders should not be vaccinated, according to Dr. Campbell-McBride.

Because immune dysfunction is not always visible upon birth, it is best to avoid them altogether for infants born to mothers suffering from these conditions.

3. Those with genetic mutations

You may have heard of the dreaded genetic mutation by now: MTHFR. It, along with various other genetic mutations, makes an individual’s detoxification system function less than optimally.

According to Chris Kesser,

[MTHFR mutation] affects detoxification.  …Methylation is required to produce glutathione, which is one of the major molecules in a detoxification cycle, but if you don’t methylate properly, you won’t be able to detoxify properly, so what this can lead to is a higher susceptibility to heavy metal toxicity and toxicity from any source like pesticides, other environmental toxins and pollutants, mold toxicity, toxicity from lipopolysaccharide or any other bacterial or pathogen-based toxin – so just in a general, an increased susceptibility to toxic overload because the body is not able to detoxify properly.

It is estimated that 40-60% of people have the MTHFR mutation, and as such, may not be good candidates for vaccination. (Read more about what MTHFR does here.)

As stated above, those with this genetic mutation have a difficult time detoxifying heavy metals, environmental toxins and pollutants, and other bacterial or pathogen-based toxins.

What do vaccinations contain? Heavy metals (mercury, aluminum), environmental toxins and pollutants (formaldehyde, monosodium glutamate, antibiotics), and bacteria and pathogens (the diseases they are formulated to create an immune response to, among others due to contamination). Read: Heavy Metal Toxicity: How to Help Kids Detox.

4. Anyone who is sick

It is well-known that those who are immunocompromised, such as those with HIV or cancer, cannot receive vaccinations. Likewise, those who are suffering from a moderate or severe illness (with or without fever) may not be good candidates for vaccination.

I hear from pregnant women often about how their doctors have pressured them into getting shots during their pregnancy. It can be very confusing, particularly when a mama’s gut instinct is to decline them. Vaccination during pregnancy has not been extensively studied.

One study concluded, however, that vaccination with live or live-attenuated (weakened) vaccines are contraindicated in pregnancy due to risk to the fetus. The study authors suggest that women of child-bearing age be tested for pregnancy before being immunized and women who have been recently immunized wait to become pregnant for at least four weeks.

Another study of the VAERS reporting system revealed a 4,250% increase in fetal death following flu vaccination. The study concluded “a synergistic fetal toxicity likely resulted from the administration of both the pandemic (A-H1N1) and seasonal influenza vaccines during the 2009/2010 season.”

Researchers were also unable to demonstrate the efficacy of the flu vaccination during pregnancy for mothers or, later, the babies born to them.

The CDC lists pregnancy as a contraindication for vaccinations for the live-attenuated flu, varicella (chicken pox), zoster (shingles), and MMR (measles, mumps, rubella).

6. Those who have previously had a reaction to a vaccination

According to the CDC, vaccine contraindications include those who have previously had a severe allergic reaction (such as anaphylaxis) to a vaccine, as well as those who previously suffered encephalopathy (coma, decreased level of consciousness, or prolonged seizures) following a vaccine.

Other reactions that may be of note are large, swollen knots at the injection site, asthma or other autoimmune condition development soon after vaccination, or high, persistent fever following vaccination.

Adverse events following vaccination are not always easy to spot, so it’s important to know what to look for. Adverse reactions may include seizure, vomiting, headache, dizziness, fainting, or stiff joints or muscles.

If you have a child who has had an adverse reaction to vaccinations, you may find our free e-book helpful. Sign up to receive it here.

Another post you may find helpful: Five Ingredients to Remove from Your Child’s Diet. You’ll get a good starting place from which to make big changes.

Finally, don’t forget to read about Our Favorite Supplement to Treat ADHD (and other behavioral disorders).

One size does not fit all

Clearly, vaccinations are not the right choice for everyone, and each family should decide what is right for them and their children. When parents are aware of vaccine contraindications, they can make informed and safer choices for their children.

Please share this post so that other parents can learn about vaccine contraindications and decide if vaccination is right for their children. 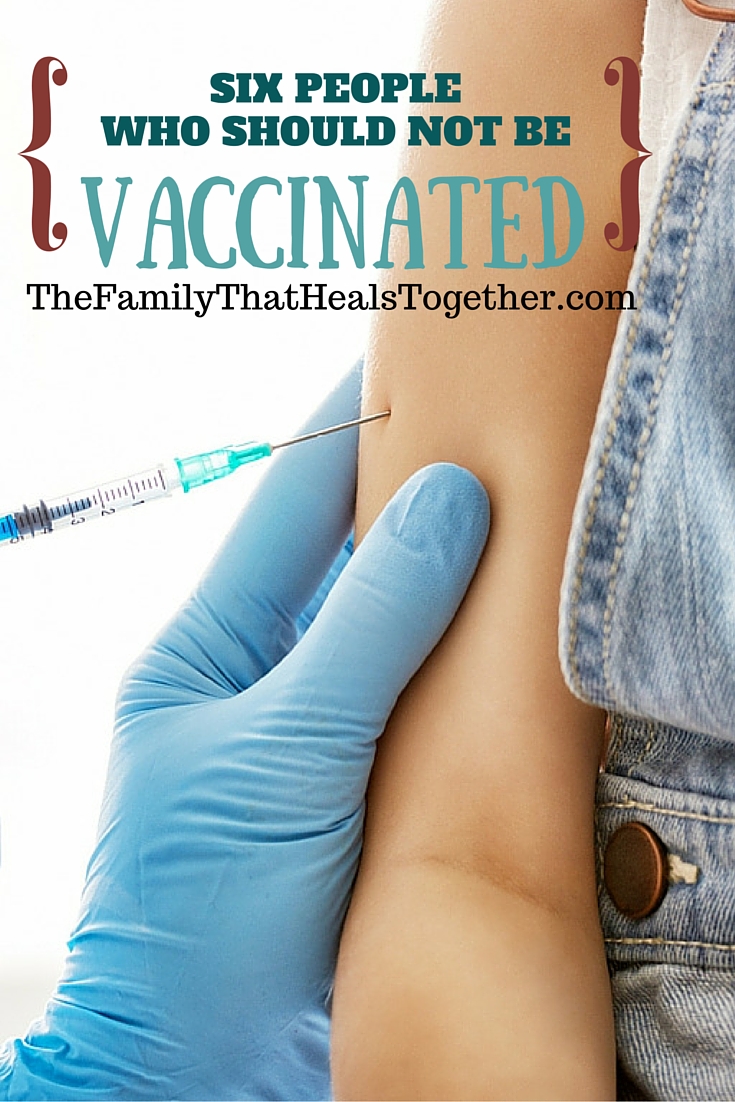