We share plenty of healthy treats around here, and you can always bet they’ll be gluten- and grain-free, refined sugar-free, and, of course, guilt-free! This gluten free peach cobbler is all of those, and paleo to boot! Find my favorite healthy peach cobbler recipe below. 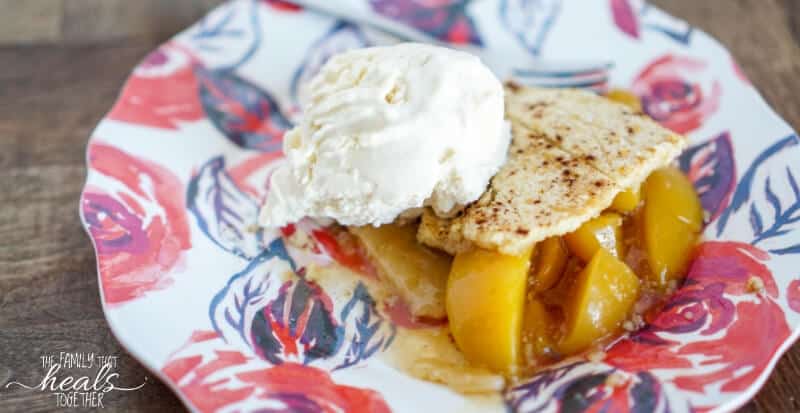 It’s amazing that it’s taken me this long to create a delectable, paleo-friendly, gluten free peach cobbler, seeing as how it’s my all-time favorite dessert. This healthy peach cobbler is surprisingly similar to the gluten and sugar-filled one I remember from childhood (if it doesn’t taste the same, don’t tell me. Healthy, grown-up me is convinced it does, ok?).

The truth is, it’s taken me years to nail a recipe I feel warrants sharing. For starters, paleo pie crust can be tricky. They always taste too egg-y or too almond-y or they are too thick or fall totally apart. I worked some finesse on this one, and with a little extra magic (see my tips below), I can confidently say this is the best paleo pie crust I’ve ever made. (Though the GAPS-friendly crust in my holiday cookbook is a close second!)

What is real cobbler?

In addition, I really wanted to make the type of peach cobbler my mama made when I was a kid. ↓ 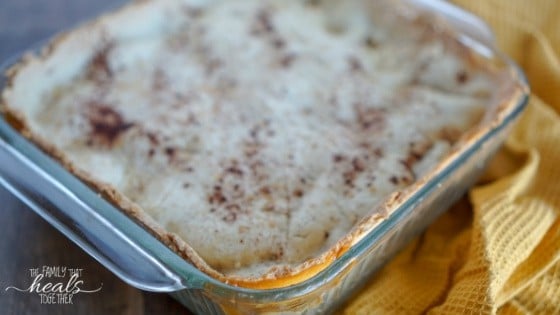 I’m gonna say something that might upset you. And you can feel free to debate me, but this is my truth: those crustless, biscuit-topped cobblers are blasphemy. They just don’t cut it, and they are NOT what I think of when I think of cobbler.

The cobbler I grew up eating has a crust on bottom, and one on top, pie-style. And if a cobbler doesn’t have two crusts, I don’t want it.

Here’s the thing, every paleo or gluten free peach cobbler recipe I come across seems to be the biscuit kind. So, as with most of my recipes, necessity is the mother of invention. And trust me, a legit, paleo-friendly, healthy peach cobbler is very, very necessary.

But… after a debate in my Facebook group, it turns out there are a good number of you who like the biscuit-style cobbler. To each their own I guess. I’m thinking this must be a regional thing, so you’ll have to chime in in the comments and let us know what a real cobbler is to you, and where you grew up.

I suspect you’ll love my healthy peach cobbler recipe below either way. 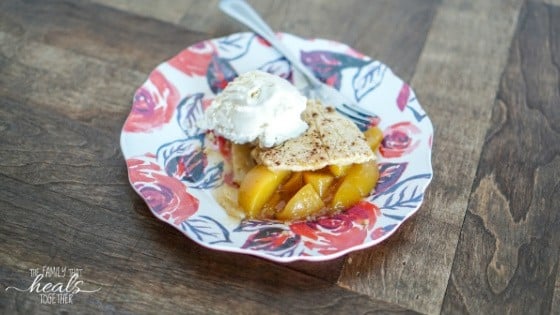 How to make a crispy paleo pie crust

Let’s be honest, nothing ever quite measures up to the same taste and flavor as white flour, especially when it comes to pie crust. BUT- with the right ingredients and technique, you can get darn close.

As I was rolling this dough out, I remembered a tutorial for a puff pastry I watched a long time ago. I’ve never made a puff pastry, but I know that the key is folding it many times in many layers and rolling it and re-rolling it in order to get it flaky. That type of dough requires placing chunks of butter over and over into the layers, which will eventually result in the layers separating slightly as they bake in order to create that desirable, flaky pastry.

This pie crust is not a puff pastry, but I did borrow the technique in order to get a nice, crispy, slightly flaky crust for my gluten free peach cobbler. Rather than place butter between layers, I sprinkled a bit of arrowroot starch on the dough before each roll in order to keep the dough from becoming too sticky. If you know anything about working with paleo ingredients, you know they can be a bit finicky.

Read the instructions below for a detailed description of how to work the dough. 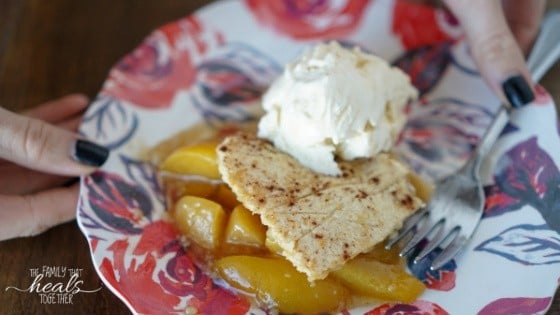 Be sure to serve this gluten free peach cobbler with the best, most creamy, super healthy homemade soft-serve style vanilla ice cream. P.S. my brother who used to refuse to eat any of my honey-sweetened goodies told me today that my ice cream was legit. It really, really is. 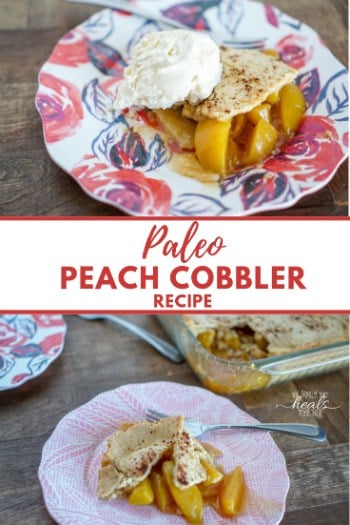 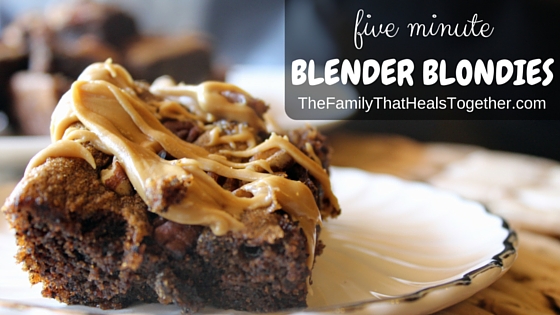 Who cares about brownies? Okay, I like brownies… but blondies? They’re really my fave. I much prefer blondies over brownies, just like I prefer vanilla ice cream to chocolate. I hope that doesn’t mean I have to give up my lady card, because, ya know, all ladies are supposed to be gaga over chocolate. (Who am I kidding? I go gaga over chocolate too!)

These blondies are so ridiculously fast and easy to make, it would be a crime for you not to. Plus, with the versatility of topping options, you can really make them your own. The maple butter recipe I have is amazing on top of them, but a handful of pecans and chocolate chips is equally good and really fast.

They use a base of walnuts, which is great because I don’t tolerate almonds well, and so many grain-free baked goods tend to contain almond flour, particularly brownie-types. Those that are made with coconut flour tend to be too fluffy and cake-like. These have a nice, fudgy texture and the walnuts provide a neutral flavor that allows for the vanilla to really take over. Even friends who typically eat wheat have enjoyed these. Hope you enjoy them too! 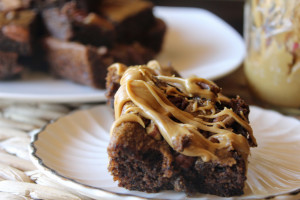 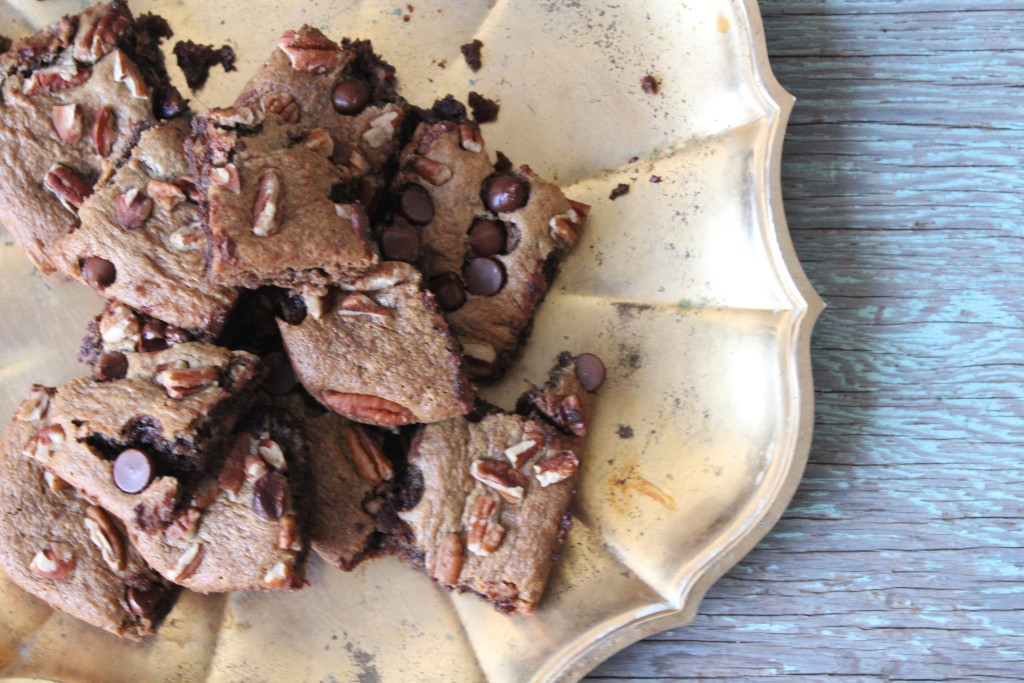 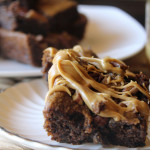 Share this recipe so your friends can see that delicious, healthy, paleo treats can be EASY to make!