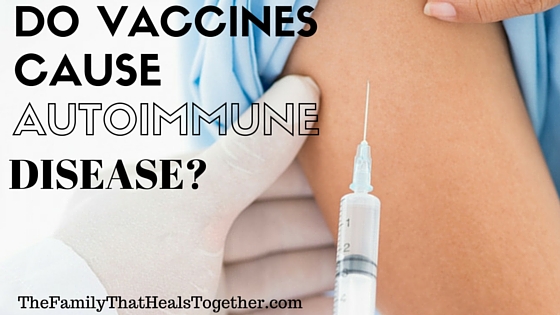 I recently wrote about vaccination contraindications and the six types of people who should not be vaccinated. The post has been very popular and I’ve been thrilled to see the information being shared. One question has come up several times since, however, that I want to address, and that’s about the connection between vaccines and autoimmune disease.

People want to know: DO vaccines cause autoimmune disease?

Just from listening to the stories of my friends, without doing any research, I’m inclined to say yes, vaccinations absolutely do cause autoimmune disease. After all, I’ve had three personal friends who were diagnosed with type 1 diabetes following vaccination. I’m inclined to think that’s no coincidence.

But what does the science say?

To understand if it’s possible for vaccines to cause autoimmune disease, we first have to understand how vaccines work.

We don’t live in a perfect world

“Let us have a look at what is happening to children in our modern society. If you look around, how many healthy children do you see? Childhood asthma, eczema, diabetes, allergies, hay fever, digestive disorders, ADHD and autistic spectrum disorders have all gained epidemic proportions! The majority of siblings of autistic children have eczema, asthma or another one of those disorders. And though all these health problems appear to be different, they have one thing in common- a compromised immune system. A compromised immune system is not going to react to environmental insults in the normal way! Vaccination is a huge insult to the immune system.

“The manufacturers of vaccines produce them for children with normal immune system which will react to these vaccines in a predictable way. However, in our modern society, with our modern way of life, we are rapidly moving to a situation where a growing proportion of children do not have a normal immune system and will not produce an expected reaction to the vaccine.

“In some of these children, vaccination, putting an enormous strain on an already compromised immune system, becomes that ‘last straw which breaks the camel’s back’ and brings in the beginning of autism, asthma, eczema, diabetes, etc.” – Dr. Natasha Campbell-McBride, Gut and Psychology Syndrome

I know we don’t want to think of our children as unhealthy. I work really hard to feed my family nourishing foods and keep their immune systems functioning well. But all my hard work can’t undo the years of damage caused by poor food choices, pharmaceutical use, the poor gut health I passed on to them, or, most of all, the toxic world we live in that, frankly, we can’t do anything about.

Vaccines and autoimmune disease: there is a connection

Vaccines cause autoimmune disease in a number of ways, including:

Because we understand that vaccines were designed to illicit an immune response, it is not a stretch to imagine that the immune response could be a negative one. Indeed, vaccinations can cause the immune system to dysfunction.

T-lymphocytes can become confused and attack the body. The immune system can incite those t-cells to overreact, and begin overproducing antibodies, including those that can attack your own tissue.

When the body is overloaded with antigens following vaccination, instead of having the expected response of creating antibodies, those T-cells become overstimulated and, instead, create autoantibodies. The T-cells are then transformed into cytotoxic T lymphocytes, which, after maturation, cause injury to tissue.

Adjuvants are the compounds added to vaccinations to increase their efficacy, by provoking a greater immune response. The term ASIA was coined to describe autoimmune syndromes caused by adjuvants, and, as such, is “an umbrella of clinical conditions including post-vaccination adverse reactions.” (source)

“Since vaccines are given to previously healthy hosts, who may have never developed the disease had they not been immunized, adverse events should be carefully assessed and evaluated even if they represent a limited number of occurrences. In this review of the literature, there is evidence of vaccine-induced autoimmunity and adjuvant-induced autoimmunity in both experimental models as well as human patients… These mechanisms are shared by different conditions triggered by adjuvants leading to the autoimmune/inflammatory syndrome induced by adjuvants (ASIA syndrome).” (source)

One report implicates the aluminum in vaccinations as a cause of neurodegenerative disease like multiple sclerosis and amyotrophic lateral sclerosis. (source)

Authors of these studies conclude that adjuvants are clearly to blame for some autoimmune reactions, and that the need for more studies is urgent. One author stated, “…efforts to unveil the connection between the triggering of the immune system by adjuvants and the development of autoimmune conditions should be undertaken. Vaccinomics is a field that may bring to light novel, customized, personalized treatment approaches in the future.” (source)

In other words, as I wrote about in “vaccination contraindications: six people who should not be vaccinated,” vaccination is not a one-size-fits-all medical procedure, and more studies need to be done, as well as testing of individuals prior to vaccination, in order for medicine to be responsibly practiced in the future.

Let’s go back to how vaccines work: they introduce a very small amount of dead or weakened antigen to the body so that the body can easily fight it and create antibodies without actually becoming outwardly sick.

But what happens when the immune system is not strong enough to fight off even these “innocent” antigens? The antigens can, instead, settle into tissues, infecting organs and creating disease.

A report from the National Vaccine Information Center details how the viruses rubella and mumps infect pancreatic islet cells, leading to type 1 diabetes.

The report states, “Doctors started making reports in the medical literature as early as 1949 that some children injected with pertussis (whooping cough) vaccine (now part of the DPT or DTaP shot) were having trouble maintaining normal glucose levels in their blood. Lab research has confirmed that pertussis vaccine can cause diabetes in mice.

As diabetes research progressed in the 1960’s, 70’s and 80’s, there were observations that viral infections may be a co-factor in causing diabetes.” (source)

A study done by J Barthelow Classen, president of Classen Immunotherapies and former researcher at the National Institutes of Health, found a causal relationship between type 1 diabetes and the Hib (Haemophilus influenzae type b) vaccine, with those receiving the Hib being more likely to develop diabetes than those who did not receive the shot, and diabetes was more likely to develope with increased dosages of the Hib vaccine. The study concluded, “The rise in diabetes, just one potential adverse effect, exceeds the benefit of the vaccine…” (source)

It has also been reported that children with autism (which many believe is, in fact, autoimmune in nature) have been found to have a measles infection in their gut. I personally know of a little boy for whom this was the case, and who improved greatly after treating the measles infection.

While you will mostly find medical literature to the contrary, there are studies pointing to the connection between measles virus infection in the gut and autism, also known as pervasive developmental disorder. One study found that “a failed cellular immune response to measles vaccine is a potential cause of autoimmunity.” (source) This takes us back to understanding that when a weakened immune system does not properly fight off an antigen, in this case measles, the antigen can then settle into the body’s tissues, in this case, the gut.

Every body is different

As the quote from Campbell-McBride reveals, today’s children may not be “healthy” enough for vaccinations. Due to immune system weakness and environmental factors, we simply cannot predict how each individual will respond to vaccinations, and every body is different.

If we do not begin to take seriously the concerns raised by researchers in recent years, the incidence of autoimmune disease, already on the rise in children, may become worse.

Do you have a child who was diagnosed with an autoimmune condition following vaccination?