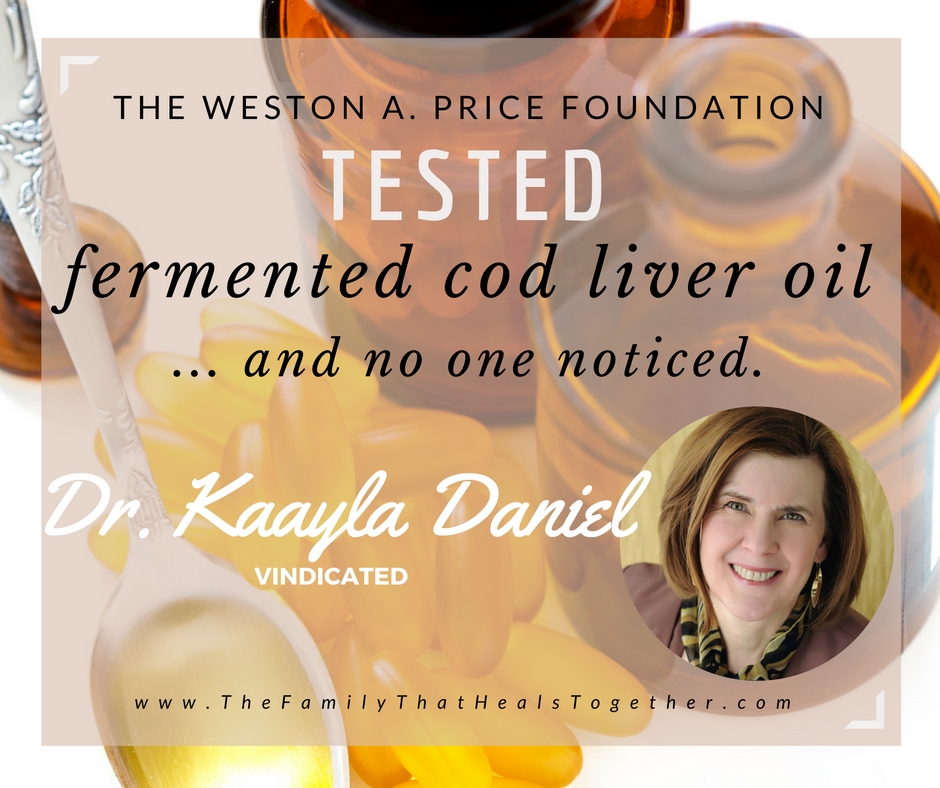 Last year brought us cod liver oil-gate: we learned that fermented cod liver oil, the gold standard of healthy supplementation for families everywhere, was a fraud. I told you about why our family stopped taking it and what we take instead.

The ensuing controversy left die-hard fermented cod liver oil fans grasping for the truth, and wondering what they should do next. Dr. Daniel was accused of lying and profiteering, and was, ultimately, fired from the foundation.

So why was Dr. Daniel willing to put her reputation on the line, losing her job, and creating enemies everywhere? I spoke with Dr. Daniel soon after she published her report “Hook, Line, and Stinker” and she told me, “I’m a mom, and that’s why I did this.”

Daniel had received complaints from many parents stating their children were having poor reactions to the fermented cod liver oil, which prompted her to investigate the health claims of the product. When she brought her concerns to WAPF, however, she was stonewalled, and the foundation refused to listen to her concerns or conduct independent testing on the fermented cod liver oil, instead relying on the reports from the company who manufactured the oil (Green Pasture).

In fact, WAPF had never independently tested any cod liver oils prior to 2015. Sally Fallon, president of WAPF says, “We have never tested products for endorsement, only looked at the ingredient list to see whether they fit into our guidelines. However, for the important product of cod liver oil, because of this controversy, I will now be recommending to the board that we develop a protocol for testing all brands for vitamin levels and markers of rancidity before we approve them.” (source, emphasis mine)

The only test results WAPF used to proclaim fermented cod liver oil contained high vitamin levels were the results posted on the Green Pasture website. These results showed that, in addition to very high vitamin levels, the bulk of the vitamin D was in the form of D2, a plant-based vitamin D found in mushrooms, and it contained very low levels of D3. Fish oils and cod liver oil do not contain plant-based vitamin D2, but animal-based D3.

Following the WAPF’s refusal to test fermented cod liver oil, Dr. Daniel decided to take matters into her own hands. That’s when things got interesting.

Dr. Daniel went underground, securing independent funding and paying an independent lab to test the oil. Though she was concerned about the oil, the results were worse than she anticipated: the oil had markers indicating rancidity, and the vitamin content was nowhere near what had been previously reported. (source)

Even if the fermentation process somehow increases the vitamin levels in fermented cod liver oil, research points to a lack of bioavailable vitamins in appropriate ratios.

This figure is nowhere near the vitamin D2 value shown by UBE, which fits with Green Pasture’s original claim of a range of 1,500-5,000 IU/tsp.

The Weston A. Price Foundation’s own testing vindicated Dr. Kaayla Daniel and no one noticed. We heard crickets.

The test results from UBE Labs show that total vitamin A was still in the same range at 3,445 IU/teaspoon but the vitamin D was 1,645 IU/teaspoon, and all in the form of D2. (Note that UBE is the lab Green Pasture relied on for their original testing and subsequent vitamin content claims).

While WAPF continues to promote fermented cod liver oil as the best type of cod liver oil available, Sally Fallon says, “In general, results from UBE were considerably higher than those for Covance… it is likely that the form of vitamin D identified as D2 by UBE labs is another, as yet unidentified, form of vitamin D. UBE Labs says that they do a very thorough job of releasing or extracting the vitamin D, and that is why they get high results. Unfortunately, they will not share their methodology with us, so we (WAPF) have not published any of their results in our journal.” (source 1, 2)

WAPF will not publish UBE’s results in their journal, yet these are still the results they use to promote exorbitantly high vitamin levels in fermented cod liver oil. Note that Green Pasture pulled the test results from their website a year ago and post no vitamin A and D levels on their bottle labels.

To date, Fallon states “…the forms of D in cod liver oil are not D2 but other metabolites. We hope to solve this mystery with further research.” She goes on to say that there are “hundreds of vitamin D metabolites” so we are to accept that it isn’t important which type of vitamin D is present, just that it’s there. (source)

The reason most of us take cod liver oil is to obtain vitamin D3, the same form of vitamin D that our bodies make when our skin is exposed to sunlight. I’m not interested in a mystery vitamin D, just vitamin D3, which is strangely absent in fermented cod liver oil.

A to D ratio

If fermented cod liver oil really does contain all this fabulous vitamin D (whatever type it may be), why are so many users (myself included) still vitamin D deficient?

As I wrote about last year, blood tests showed that both my son and I were vitamin D deficient, after years of faithfully taking fermented cod liver oil. I was flabbergasted. Not only had I spent a small fortune on this oil that was supposed to bolster my immune system and keep me healthy, but I was suffering from the very ailments it was supposed to alleviate and prevent: vitamin D deficiency and poor immune function. My son had the same problems.

It turns out, I wasn’t alone, and Sally Fallon admits that others have reported similar problems. She says, “Obviously the product does not have the same effect on all people.  Again, this is an interesting question and one that we hope to look into.” (source)

Fallon also notes, “This does not mean we do not recommend that some individuals have their vitamin D levels tested. Such testing can be very useful in determining vitamin D status and the effectiveness of cod liver oil or vitamin D supplements.” (source)

If we’re taking cod liver oil that contains 1,645 IU/tsp of vitamin D, how the heck are we deficient?

Did you buy into fermented cod liver oil, hook, line, and stinker?

I did. And, once I learned the truth, our family stopped taking it. We now rely on extra-virgin cod liver oil, a choice I feel good about, and another that the WAPF endorses.

I’m not sure why the WAPF has not been more transparent about this matter, but as a mom who has worked hard to heal a very sensitive child, I am very careful about what I give my family, and when there is this much misinformation and controversy surrounding a product, I simply cannot trust it.

Please share to help clear up some of the misinformation surrounding fermented cod liver oil.