With seemingly endless modalities for keeping your family healthy, you might wonder if you should add chiropractic adjustments to the arsenal. Below you’ll find some compelling reasons to consider taking your child to a pediatric chiropractor. 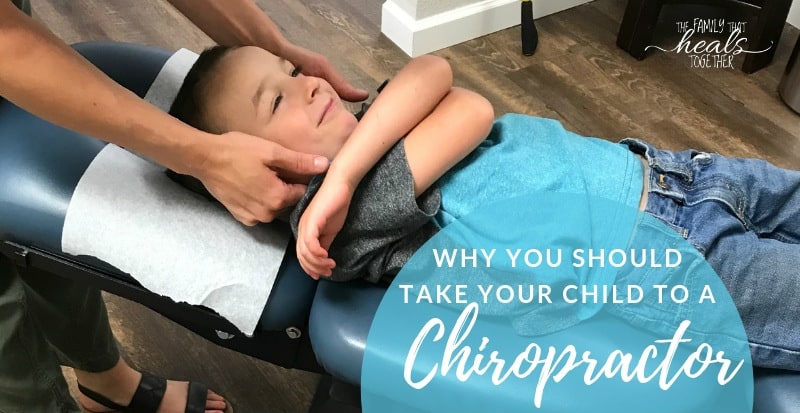 What are the benefits of chiropractic?

It’s widely understood that chiropractic care offers plenty of benefits for the general population, including:

But can a child go to a chiropractor?

Yes! The first time I took one of my children to the chiropractor, he was just days old. My homebirth midwife suggested I get him aligned after the contortionistic journey of birth and to help him latch better. Thus started our family’s journey with pediatric chiropractor care.

While you will find a fair amount of controversy and even over-reaching legislation in regards to taking kids to chiropractors, parents who have used these wonderful doctors can attest to the benefits for their children.

What is a pediatric chiropractor?

How old do you have to be to go to a chiropractor?

Chiropractic care can benefit babies, pregnant women, elderly patients, and everyone in between. Chiropractors know how to tailor adjustments to best benefit an individual patient. For instance, while an athlete or large adult may need a strong manual adjustment, babies benefit from a gentle adjustment with an “activator” tool- a small clicking device that delivers a gentle impulse force to the spine with the goal of restoring motion to the targeted spinal vertebra or joint.

Are Chiropractors safe for babies?

A well-trained chiropractor knows how to gently treat babies, making chiropractic care very safe for little ones! Chiropractic care of children has been found to be safe and effective for children from ages ranging to less than a day old to age 18.

But the real question is- why would a baby go to a chiropractor? In fact, why would children need to see a pediatric chiropractor at all?

The expertise of the chiropractor is in checking the child’s spine for mis-alignments that impair nerve system function therefore affecting overall body function. The bones of the spine, the vertebrae, house and protect the spinal cord. The spinal cord is an extension of the brain and carries information from the brain to the body parts and back to the brain again. Subluxations interfere with the nerves’ ability to transmit this vital information.

The nerve system controls and coordinates the function of all the systems in the body: circulatory, respiratory, digestive, hormonal, eliminative and immune system. Any aspect of health may be impaired by nerve interference. The chiropractic adjustment restores nerve system function allowing the body the ability to express a greater state of health and well-being.

Additionally, parents have observed improvement in a variety of conditions, both acute and chronic, in their children. And while mainstream medicine doesn’t fully recognize the benefits of taking kids to the chiropractor, it is a modality worth pursuing.

Because children are obviously smaller than adults, care is taken to ensure they are given appropriately gentle adjustments.

As mentioned, an activator tool is often used, especially for children under age five. In addition, reduced-force spinal manipulation is often used by pediatric chiropractors, as well as cranial therapy, a gentle, massage-like technique that allows chiropractors to manually adjust a patient’s craniosacral system.

Can a chiropractor help with reflux in babies?

Yes! Improvement in GERD (gastroesophageal reflux disease) has been observed in infants. While the conventional treatment for reflux in babies is prescription medication, which can have undesirable and long-term side effects, chiropractic care is non-invasive.

After four visits, notable improvement was observed, and after three months of pediatric chiropractor visits, there was a total resolution of symptoms. The baby had been previously treated with Prilosec, a prescription medication.

Again- yes! Studies also support taking children to a pediatric chiropractor for constipation. One study found that three children under the age of two who had suffered from constipation leading to infrequent bowel movements every 4-7 days, with straining and even pain and bleeding, had total resolution of the constipation, as demonstrated by an increased frequency in bowel movements once every 1-2 days without straining and pain. 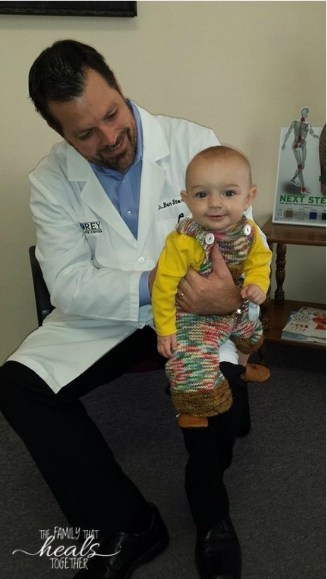 My youngest getting adjusted to help with fussiness and constipation.

Because of the benefits observed in spinal and nervous system health in children who receive chiropractic care, we can also see how sleep would also be improved.

Cranial bones that aren’t moving properly can interfere with the sleep center in the brain and prevent a child from being able to reach a state of deep sleep. In addition, headaches, neck pain, and other discomfort can keep kids in a shallow state of sleep. When locked elements are released, children able to fall into a deep, peaceful slumber.

Can chiropractic help with autism?

Chiropractic care can also ease symptoms of sensory overload for kids with autism.

As one doctor says, “…autism is not just about the way the brain processes sensory information. It also has to do with the way sensory information is received and acted on. If nerves are disrupted, that creates a stress on the system.

By the same token, if the nerves of the gut are affected, digestion is not the only thing that slows down. And freeing up all those nerves to work well affects the whole sensory triad: thinking, feeling, and body balance. Chiropractic won’t roll back the developmental clock, but the effects of reducing the stress on the nervous system can be dramatic.”

Universal benefits: why you should take your child to a pediatric chiropractor

Even if your child isn’t suffering from a chronic condition like constipation, autism, or sleep disruption, there are a myriad of reasons to take children to the chiropractor on a regular basis, and also during acute situations. Here are some of the reasons I’ve taken my kids to the chiropractor:

Ear infections- perhaps one of the most popular reasons for taking kids to the chiropractor, ear infections can be relieved with an adjustment or two without the need for antibiotics. While there are many contributing factors to acute and recurring ear infections in babies and children, having a chiropractor open up the ear canal to allow fluid to drain can greatly relieve symptoms and infection.

Acute neck injuries- this past summer, as my six-year-old was climbing into our pool, he tilted his head to put his swim goggles on. He somehow strained his neck so badly that he could barely move it for several days. He kept his neck craned and cried if he had to move. He basically laid around on the couch at an odd angle until I could get him in to our family chiropractor first thing Monday morning.

I was astounded at the immediate relief of his symptoms after one adjustment. He was instantly able to move his neck around freely again and the pain was gone. 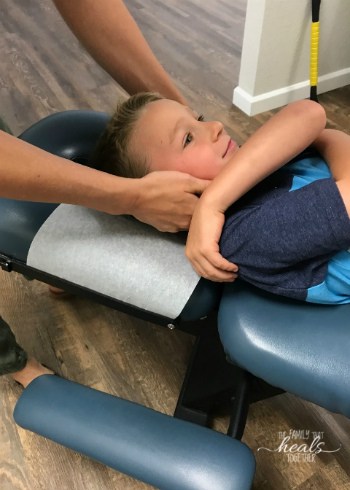 Mister Six getting adjusted for an acute neck injury.

Other acute injuries- likewise, at the same visit, my four-year-old had recently jumped wrong on his leg on the trampoline. (I promise injuries are not a frequent occurrence at our house, but these two happened in quick succession. *shrug* #boymom) He had limped around for a few days and was still favoring his leg a bit when we got to the chiropractor. That single adjustment also relieved his remaining pain and inflammation. 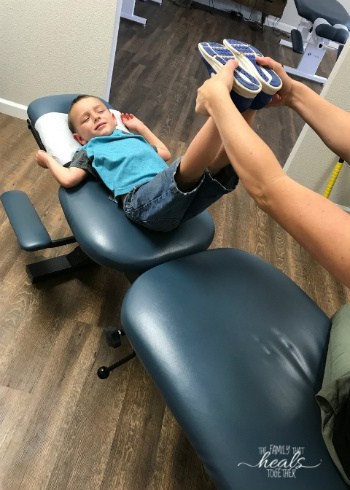 Immune system boost- I also take my kids to the chiropractor when they’re sick. We don’t do sick visits at the pediatrician because most pediatricians aren’t well-versed in alternative healing modalities and will only offer conventional medication options in the case of illness. Instead, we take a trip to the chiropractor for an immune system boost, which typically results in shorter duration of the illness.

Behavior- our family has also seen benefits in behaviors associated with PANDAS/PANS, ADHD, and more. I’ve noted a calming effect that adjustments have on my child with behavioral disorders, as both the boost to the immune system and the nervous system regulation are beneficial for children with a myriad of symptoms like OCD, ODD, angry outbursts, hyperactivity, and so forth.

Have you seen benefits from taking your child to a pediatric chiropractor? Share your experience in the comments!