If you’re looking for one more reason to love magnesium, here’s one! It makes for a smart and simple growing pains treatment. In this post, we’ll explain what causes growing pains and how to make growing pains go away. 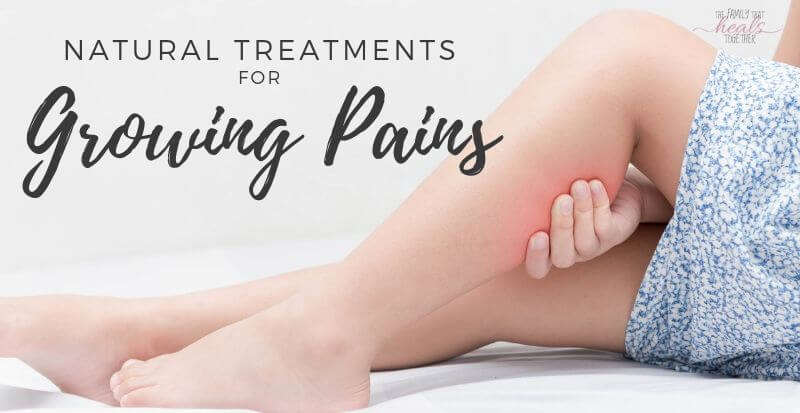 Your kid wakes up in the middle of the night crying in pain and clutching her calf. She’s suffered no injuries that you can think of. What could be going on? Growing pains can strike out of nowhere and can range from a mild to significant pain.

What are growing pains and what do they feel like?

Growing pains are muscle cramps or spasms that growing children may experience, usually in the preschool or pre-teen years.

They tend to show up in the calves and quads, but can also be felt behind the knee or in the groin. Growing pains affect both legs, but may be felt in only one side or the other at a time.

How long do growing pains last?

You might notice growing pains in late afternoon or evening (just in time to disrupt bedtime), but they might also wake a child in the middle of the night. Different children will have different experiences. The pain can range anywhere from a dull ache to sharp and debilitating.

Growing pains tend to come and go and children do not usually experience pain every day.

At this time, no one knows what causes growing pains. There’s also little evidence to link “growing” pains with actual growth spurts.

The prevailing theory is that the muscle cramps/spasms known as growing pains are actually linked to intense levels of activity common to childhood and subsequent over-use of the muscles, leaving them prone to cramping.

Other theories include a connection to restless leg syndrome and the possibility that not all body tissues grow at the same rate causing the body to protest in the form of growing pains.

An estimated up to 40% of children experience frequent growing pains, while others never experience them.

Most of the time, growing pains are considered “normal,” but they might also be tied to nutritional deficiencies, such as magnesium or vitamin B6 deficiency.

It is important to keep in mind that growing pains can be similar to other, more serious, conditions.

If something seems off, do not hesitate to seek a professional opinion. You should be concerned about growing pains if you or your child:

While most folks consider growing pains a childhood malady, the pain doesn’t always abate with maturity. It can continue on into adulthood.

The sensation of growing pains in adults is often quite similar to that experienced by children – pain on both sides that shows up in the calves, quads, or behind the knee and that’s worse in the evenings or at night.

So how do you make growing pains go away? Conventional treatments include stretching the legs, massaging the sore areas, and applying heat to affected areas.

The following holistic approaches may help to bring longer-lasting relief. In addition to the above, some parents have also seen an improvement in their child’s growing pains by using CBD oil and chiropractic care.

How can I stop my legs from hurting at night?

In the case of adults with growing pains, rule out other potential causes.

Adults are more likely to have a condition such as delayed onset muscle soreness (DOMS), rheumatoid arthritis, osteoarthritis, or fibromyalgia as the root of their “growing pains.”

If you truly have growing pains, then many of the same natural remedies for growing pains mentioned above will apply to adults, too.

Food is medicine, and the case of growing pains is no exception.

Since vitamin B6 deficiency is linked to growing pains, be sure to include foods rich in vitamin B6, like:

Bone broth with its high collagen content is beneficial for healthy tissue development and may help to avoid or alleviate growing pains. A hydrolyzed collagen supplement works too.

Some parents have also found that removing dietary inflammatory triggers such as sugar, gluten, and artificial sweeteners from the diet helped reduce their child’s growing pains.

And on the topic of electrolytes – do bananas help growing pains? They might.

Bananas are high in potassium. So, if low potassium is part of the problem, bananas may help stop growing pains. Some dried fruits such as dates and prunes, cooked spinach, cooked broccoli, and sweet potatoes are also good sources of dietary potassium.

Growing pains are unpredictable. Your child may or may not have them. Ensuring your child is well nourished with all the right vitamins and minerals can help.

So can good nutrition and a few home remedies.

Bonus: Many of the supportive tips to get rid of growing pains will also support your kid’s overall health.

What growing pains treatment options worked for you? Share in the comments below!

The Original Easy Paleo Fudge Recipe
The Ultimate Vitamin B List: How To Pick One For Your Needs