Migraines have been my longest-standing, most life-disrupting health problem since I can remember. And while lifestyle changes have helped tremendously, as soon as my diet lags, my sleep gets disrupted, or my stress levels rise, headaches are the first thing to get worse. I recently created this herbal pain killer shot and have been pleasantly surprised at how effective it is.

Do you need an herbal pain killer?

The big question is: why wouldn’t you just take an over the counter pain killer? They’re cheap, readily available, and easy to pop down with a little water.

However, taking these over the counter pain killers (aka NSAIDs- non steriod anti-inflammatory drugs), has serious consequences for your health. As a long-time migraine sufferer, I have taken more NSAIDs than I care to admit.

Why you should avoid NSAIDs:

I used to take them like they were candy. Headache? Down a couple 200 milligram ibuprofen. Full-fledged migraine? Take three or maybe a couple acetaminophen.

In the last year or so, it was taking 800 mg at once to take the edge off of my worst migraines, and I was still taking over the counter pain killers on occasion even recently… until I discovered this herbal pain killer shot.

I whipped it up on a whim knowing each of the components alone can be good for relieving pain. I had a monster migraine setting in and I was feeling the pressure. My natural attempts at relieving the pain weren’t working but I didn’t want to take a toxic over-the-counter drug.

Out of desperation, I made my concoction and downed it… and within minutes, my pain began to ease. I was astounded!

A little while later, when the pain threatened to return, I made and took another shot, and this time the pain stayed gone for good.

Now, anytime I feel like I could possibly have a headache coming on, I take my herbal pain killer shot, and I’m happy to say I haven’t had a headache, let alone a migraine, since I first took this shot.

Just three simple ingredients. It doesn’t taste too bad at all, and takes just a minute to mix up.

#1. Turmeric- extensively studied and found to be beneficial in relieving respiratory illnesses, including asthma, turmeric is also a powerful anti-mucosal.

You already know it’s great for dental health if you’ve tried my tooth powder recipe (if you haven’t, you should!).

But what about turmeric for pain relief?

The active compound in turmeric, curcumin, is a powerful anti-inflammatory. Curcumin is known to inhibit inflammation by suppressing nuclear factor κB (NF-kB), a protein complex responsible for creating cytokines (some of which are responsible for pain responses), restricting various activators of NF-kB as well as stemming its expression. (source)

Because black pepper increases the efficacy of turmeric up to 2000%, I keep a bag of bulk organic turmeric on hand with a little black pepper already mixed in. (I mix with a small amount of whatever ground black pepper I have on hand- less than two teaspoons of pepper per cup of turmeric.)

Buy the organic ground turmeric I use here.

#2. Ginger extract- theoretically, you could use ground ginger along with the ground turmeric, but I haven’t tried that, and I’ve had great success with ginger extract for a variety of conditions, including pain and swollen lymph nodes.

According to one study,

Buy the organic ginger extract I use here.

#3. White willow bark- one of my recent favorite discoveries, white willow bark is an old folk remedy that was used for pain relief prior to the invention of Aspirin, and has been found to be as effective without the side effects.

Like Aspirin, white willow bark is a nonselective inhibitor of COX-1 and COX-2 (those enzymes targeted by pain killers), used to block inflammatory prostaglandins. (source)

I make my own white willow bark extract by combining white willow bark and vodka in equal parts in a glass jar and allowing to sit in a cool, dark place for at least six weeks. I shake the jar as often as I can remember during this time.

Keep in mind, white willow bark may not be safe for children or for pregnant or breastfeeding mothers. For use with children, you can replace the white willow with meadowsweet. During pregnancy and breastfeeding, these ingredients are best left out of the formulation.

In addition, those exhibiting symptoms of chicken pox or flu, those with asthma, or those who are allergic to aspirin should not use white willow or meadowsweet.

Note: Due to the natural blood thinning effects of this combination of herbs, people with blood disorders or taking anti-coagulants should talk to their care provider before taking them.

When I’m in need of some pain relief, I fill a glass with about a quarter cup of water, add a dropper-ful each of ginger and white willow bark extract, and about 1/2 teaspoon of ground turmeric and give it a stir before drinking it down in one gulp.

I generally feel relief within minutes.

I’ve been so thrilled to finally be able to ditch over the counter pain meds once and for all. This herbal pain killer shot has been so effective, I can’t imagine ever needing to go back, as it stops pain in its tracks every time.

Best of all, the ingredients are non-toxic and even promote long-term health benefits and overall wellness.

Are you ready to ditch your toxic pain killer pills? Share for a friend who needs relief! 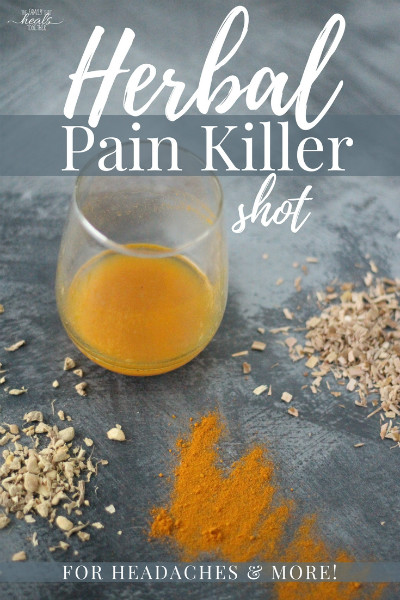 The Truth About Best First Foods For Baby
Everything Extract: How To Make Your Own Natural Antibiotic